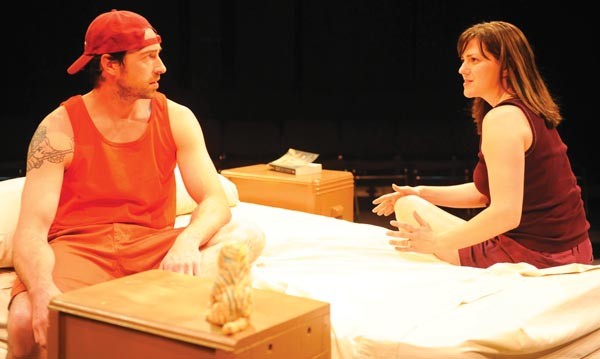 But once I made peace with the fact that Orange Flower Water was going to be about, and only about, suburban infidelity, I was able to enjoy the many rewards of this terrific No Name offering.

Sure, it's about breeders behaving badly, but it's also about some truly impressive writing. Wright, a playwright who should be more widely known, attacks his tale of an affair between Beth Youngquist and David Calhoun — and its radioactive fallout — with an intense intelligence. It's about 100 minutes long, with Beth and David and their respective spouses, Brad and Cathy, the only characters. Wright gives highly theatrical voice to their need and anger, intangible hopes and crushing disillusions. What's especially amazing is that he manages it all with an elliptical writing style in which what's unsaid is every bit as vital as the dialogue.

Director Steven Wilson has chosen to present the work arena-style — audience on all four sides — giving the evening a bugs-under-a-microscope feel. He also has the actors sit in each corner of the stage when not in the scene, lending an appropriate boxing-ring quality to the production.

And he's brought out tough, honest performances from an equally talented cast. Robin Abramson and Tressa Glover, as Cathy and Beth, are two of this city's most intelligent actresses, and both attack their roles with a ruthless masochism; we easily see that being either the "wronged" or the "wronging" woman comes at an enormous cost.

Ricardo Vila-Roger plays David with the self-serving rationality of an adult and the emotional selfishness of a child, creating an unbelievably dangerous character in the process. And Mike Mihm's sledgehammer of a performance as Brad ends up surprising us with wounded heartbreak.