But what steps can actually be taken to stop this scourge? 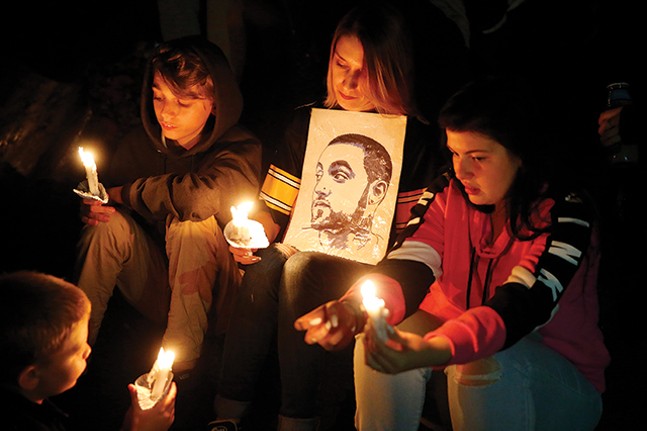 On September 7, the region lost a favorite son to the overdose of rapper and Pittsburgh native Mac Miller. According to recently released reports, he was found dead in his Los Angeles home, overdosed on alcohol, cocaine, and fentanyl, a powerful opioid.

Miller was 26 years old, and about to go on tour, including a November show in Pittsburgh. In the past, Miller had openly admitted to addiction problems with substances like the opioid codeine.

His death shines yet another light on opioid-related substance abuse. The national epidemic is particularly stark in Allegheny County. With another high-profile death thrusting the problem to the forefront, advocates are renewing calls to take action to end the epidemic.

What are the steps needed to stop the scourge?

“There is always a wait,” says Lane. “There is a good chance that three days later, they will be gone and missing and they will be back into addiction.”

Lane says funding for more beds is needed, so patients can be treated for longer than the typical two-week stint. She recommends rehabs housing patients for up to 90 days.

Pennsylvania Attorney General Josh Shapiro agrees. He says the opioid epidemic is the commonwealth’s top public-health issue. And while his office has ramped up enforcement, arresting on average 4.5 drug dealers per day, and started investigations into drug manufacturers, he believes more needs to be done to treat those suffering from addiction.

“We still have a long way to go,” says Shapiro. “Eighty-nine percent of those needing substance-use disorder treatments do not receive it through a specialty facility. This must change. We need more funding for treatment.”

Changes to these programs also mean changes for patients coming out of rehab. Lane notes marijuana, which has shown to reduce opioid prescriptions, could play a role. And a federal job guarantee program, where the government provides jobs with living wages for those seeking employment, could be a game changer for people recovering from addiction; especially if that work is providing services to people in recovery.

It can be a struggle for addicts to make their way back into the workforce, even though meaningful work is important for their recovery, according to Lane.

“The ability to help other people, it feels so good, that can become your drug,” says Lane.

According to research from Avalere Health, Pennsylvania has 1,441 certified providers of suboxone and related prescriptions. Considering research has shown Pennsylvania may be undercounting its opioid-overdose deaths, the commonwealth could be experiencing a shortage of providers

Additionally, Bell thinks naloxone, a drug that reverses opioid overdoses, should be available over the counter and kept in people’s medicine cabinets. She also wants laws changed, so inmates can be treated with Suboxone, since time in jail can be a critical time for recovery.

“We are not doing enough in Pennsylvania,” says Bell. “We know an effective medication is methadone, and it is still widely unavailable. If they are not offering the most effective treatment, they normally consider that malpractice.”

Thom Duddy of pharmaceutical company Adapt Pharma is trying to do just that. His company, which is based in Delaware County, created a device resembling a nasal spray that makes it simple for anyone to administer naloxone. Adapt was recently acquired by Emergent BioSolutions.

“We know a great deal of these overdoses are witnessed by laypeople and not in a medical setting,” says Duddy. “The reason why we are doing this is to empower people to be able to go get this if they are concerned about someone.”

Without insurance, the device costs $100-200, but with many insurance providers, the devices can be acquired for free. According to an October press release, Emergent BioSolutions' will be distributing its naloxone nasal-spray devices to 16,568 public libraries and 2,700 YMCAs for free.

Needle-exchanges are another vital tool. These harm-reduction facilities, like Prevention Point, allow people access to clean needles, even to use illicit drugs. Bell says once users are in the facility, they have easy access to addiction treatment and other help.

Bell thinks drug addicts should be treated more like patients and less like criminals. “We need a philosophical shift to look at this as a public-health issue and not a criminal-justice issue.”