Opinion: If Steelers coach Joey Porter's past actions are relevant to recent arrest, then so are those of the arresting officer | Opinion | Pittsburgh | Pittsburgh City Paper

Opinion: If Steelers coach Joey Porter's past actions are relevant to recent arrest, then so are those of the arresting officer 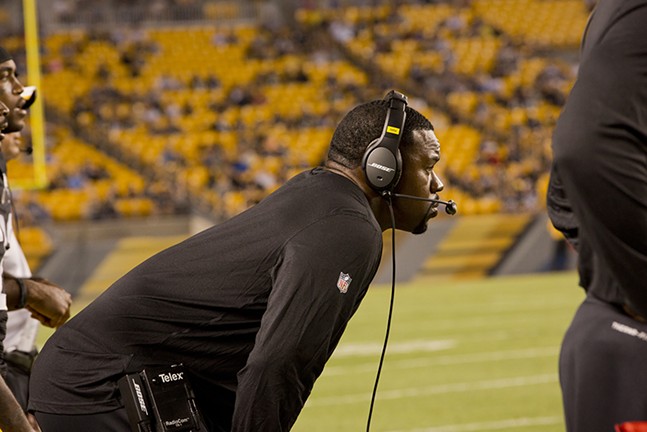 CP file photo
Joey Porter
Read Rebecca Addison's original story about the arrest here
The arrest of Pittsburgh Steelers linebackers coach Joey Porter made big headlines starting in the wee hours of Monday morning. By the afternoon, the story was even hotter after a very vivid incident report written by the arresting officer was released by authorities.

The stories were all pretty much the same, including details of the incident and, as City Paper news editor Rebecca Addison reported yesterday, Porter’s past brushes with the legal system. The first charge listed was an incident in which Porter was accused of drunk driving, resisting arrest and assaulting an officer in California; those charges were later dropped. That incident had some similarities with this weekend’s altercation, and I see why media outlets chose to list it.

However, most media accounts then listed every other time Porter had a run-in with the law. In 2014, he was accused of writing a bad check in Las Vegas; in 2007, he was issued a summons for misdemeanor battery at a Las Vegas casino; and in 2006, Porter’s dogs allegedly got out of his home and killed a miniature pony. And finally in 1993, Porter was shot in the buttocks at outside a Denver nightclub when six others were also shot, one fatally.

This practice is nothing new for media companies. I know that City Paper has done it in the past. Sometimes the past information relevant, such as Porter’s previous run-ins with police. And sometimes it’s just something salacious to remind the public about, so they’ll keep reading and, hopefully, click through to that old story. While this episode makes me question whether it’s necessary to include every past incident of a person’s life, I would never eat someone’s lunch for including these things.

But here’s the problem. Paul Abel, the officer who arrested Joey Porter, has a pretty tumultuous history of his own. The most infamous incident involved him pistol-whipping and shooting a man on the South Side in 2008. Abel was celebrating his wife’s birthday and got into an altercation with a man at a bar. Later in the evening, Abel came across a man, Kaleb Miller, and accused him of the earlier confrontation. Abel hit Miller with his gun, the gun went off and shot Miller in the hand. But Miller wasn’t the man from earlier in the evening, and even if he was, Abel’s actions seemed out of line for an intoxicated off-duty officer.

Abel was suspended and charged criminally in the case. Abel claimed that even if it was the wrong man, he wasn’t retaliating; he was acting as a police officer. Judge Manning called Abel’s actions "inappropriate, imprudent and ill-advised." However, he also determined that Abel was a police officer, even off duty, and he was acting in his official capacity. Abel was later reinstated to his position. Abel also had at least two other complaints filed against him with the Citizens Police Review Board. One complaint was for an altercation with his brother-in-law, and the other was filed by his wife alleging Abel told her to make false sexual-abuse allegations against the grandparents of her children.

After Addison reported this yesterday, City Paper began receiving comments asking how this information was relevant. There was no evidence that Abel acted inappropriately in Porter’s arrest some readers stated. I don’t disagree. Abel’s arrest of Porter may have been done by the book. At this point, there doesn’t appear to be any evidence that Abel acted inappropriately. But adopting that same standard, there is no information alleging that during the most recent incident that Joey Porter wrote bad checks at a casino, that his dogs got out and killed horses of any size or that he was shot in the ass outside a Denver nightclub. So that means that additional information was merely gratuitous

Now, at face value, the information about Porter's previous run-in with police in California seems to have a place in a story like this even though it has no direct bearing on the most recent incident. Now, let’s apply that same standard to Officer Paul Abel. Abel has a previous history of acting inappropriately in the line of duty. He falsely detained a man for an assault he didn’t commit, he assaulted him with a pistol and then shot the man. Abel alleged he was acting in his capacity as a police officer when he shot Miller, and the judge bought it.

So that brings us back to the media reports of Porter’s arrest. If mentioning his previous run-ins with the law has new value and speaks to his credibility, then the police officer should be held to the same standard. The word of a police officer is automatically given more weight than the person arrested. We see it in court when an officer testifies against a perpetrator, and we see it in civil cases when police officers are accused of acts of excessive force and false arrest.

In this case, I think it is absolutely appropriate to bring up Paul Abel’s past. At the very least, it’s just as relevant as bringing up Porter’s. If an officer with a controversial past is going to remain on the force, then the baggage collected in the line of duty should stay with that officer. If it’s important that a football coach be held to this standard, then surely it is appropriate for an officer of the law.