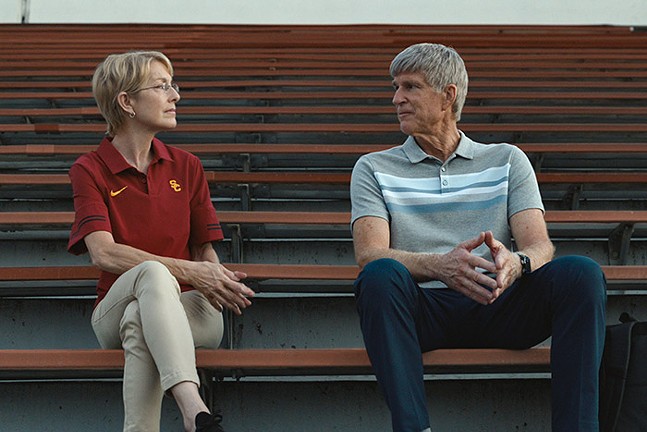 Photo: Netflix
Matthew Modine, right, as Rick Singer in Operation Varsity Blues: The College Admissions Scandal
Operation Varsity Blues: The College Admissions Scandal, a new Netflix documentary directed by Chris Smith, intercuts its primary story with moments of real prospective college students going through the emotional turmoil of finding out what school they did or didn’t get into. It’s a little much as a conceit, but in a film so devoid of people with connections to reality, it kind of works.

That description could probably act as a summary of the whole film. Operation Varsity Blues is the first film to tackle the infamous college admissions scandal uncovered in 2019 when over 50 celebrities and prominent members of society were indicted on federal corruption charges from paying exorbitant sums to get their kids into elite colleges, which included forging documents and bribing counselors into pretending they were athletes. This makes for fertile ground for a story, but while the film is interesting, it never quite rises to a level of importance.

Of course, it’s hard to truly move the culture of documentary filmmaking when everyone already knows what happened. A participant in the film at one point remarks, “In America, we love the wealthy and we hate the wealthy. They disgust and they fascinate us.” This point rings true, which is why it made the admissions scandal such an easy target. There’s nothing more satisfying than banding together to dunk on obscenely out-of-touch white elites living in the hills, pushing their privilege even further into criminality. The problem, when it comes to Varsity Blues, is our perverse fascination led us to pick over the case so thoroughly that there’s only so much left to add.

This becomes especially true when the people involved are just as awful as you’d assume. From CEOs to out-of-touch actors, Beverly Hills self-help gurus, and Instagram Influencer teens, these people don’t bring any surprises for a single moment in the film. Smith decides to tell a lot of the story through re-enactments of real wiretapped phone conversations, which is fine but gives the audience the feeling that he really wanted to make this as a feature film, and turns the main players into shitty characters who don’t have any depth outside of being the exact people you thought they’d be.

A lot of the “new” information here comes in the form of Rick Singer, the “College Admissions Expert” who masterminded the whole scheme and made millions in the process. Played by Matthew Modine for whatever reason, Singer is the most previously unknown entity involved in the process, a behind-the-scenes figure who came from a modest background and managed to convince the elite of elites to let him into their circle, so it makes sense the film focuses their efforts on him. Only problem? He's not that interesting, either. Again, this isn’t really the fault of the film, but Singer turns out to be just another person whose entire life centers around making as much money as quickly as possible, with zero care for anyone or anything outside of that. He’s a good villain, but one without much depth.

Luckily, Operation Varsity Blues pokes and prods and finally finds the part of the story that’s easily the most interesting, and one that I didn’t expect them to find. The film devotes a surprising amount of time to how a scandal like this could come to be in the first place, and it’s here that it really finds its depth and point of view.

From the inherent bias that comes with standardized testing to the scam that is school rankings and how it drives out worthy students in favor of the families that can pay the most to keep the endowment high, Operation Varsity Blues is at its best when it’s exposing just how much colleges want things like this to happen. And if CEOs and celebrities are willing to risk jail time to get their kids into the perfect school, well, then it must be worth it, right? Operation Varsity Blues is focused on a scandal, but it’s often the less interesting one.