A New Kind of Fallout launches a "music that matters" series 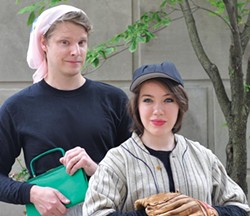 Given that he heads Opera Theater of Pittsburgh, it's no surprise that Jonathan Eaton loves classical opera. Listen to him gush about The Marriage of Figaro, which he calls (only half-jokingly) "the high point of Western Civilization" and (not jokingly at all) "Mozart at his very, very best."

But Eaton knows that, like other classical art forms, opera — its core repertoire forged in the 18th and 19th centuries — struggles to engage contemporary audiences. "We feel that opera is in danger of becoming a museum art form," says Eaton. "We all love museums, [but] unless we keep reviving the medium, the medium will fossilize."

Opera Theater's strategies include staging all its shows in English, a variation from traditional practice. Another is its "music that matters" series of commissioned full-length operas addressing contemporary issues, starting with one in its annual festival-format season, SummerFest. A New Kind of Fallout, with three performances July 18-26, is inspired by the work of Silent Spring author Rachel Carson and dramatizes the dawn of the modern environmental movement.

"Music that matters" already has at least one convert: Tammy Ryan, the acclaimed Pittsburgh-based playwright (Lost Boy Found at Whole Foods) whom Eaton recruited two years ago to write the opera's libretto.

Prior to that, Ryan had seen only one opera. The two-year process of researching and creating Fallout left Ryan with a new appreciation for opera. "For me, not only can opera contain the ‘big themes,' but even more exciting to me it can elevate the ordinary ... so we can see ordinary struggles, conflicts, relationships that we all deal with play out on a higher plane," she writes in an email.

Fallout isn't a Carson bio: The Springdale, Pa.-born scientist and author's estate is protective of her life story, says Ryan. So Ryan and noted New York-based composer Gilda Lyons structured A New Kind of Fallout (its title referencing Carson's view of indiscriminate pesticide spraying) as a fictional story about a pregnant young woman who in 1962 is driven to action by reading Silent Spring. Complication: Her husband creates ads for pesticide manufacturer Better Life Chemical Company, which brands Carson a "nutcase."

In other SummerFest news, this season — again entirely housed at Oakland's landmark Twentieth Century Club — has been expanded from three weeks to four.

Other highlights include a production of Strauss' rarely staged final opera, Capriccio (July 25-Aug. 2); it's the world premiere, says Eaton, of a re-orchestration of the work for a 21-piece orchestra. SummerFest also offers a novel production of Adler and Ross' classic Broadway musical Damn Yankees (July 11-Aug. 1), with most of the roles gender-reversed. The kid-friendly production The True Story of the Three Little Pigs (tickets: $5-10) is performed all four Saturdays. And there are six installments of the International Recital Series, with singers highlighting the repertoires of six different countries.

And let's not forget The Marriage of Figaro itself. SummerFest offers a production of Mozart's classic comic opera with an 18-piece orchestra backing visiting baritone Chad Armstrong and soprano Adriana Velinova. And, furthering its mission to engage new audiences, SummerFest also mounts Figaro Redux, a slightly shorter, modern-dress adaptation, each of whose three acts is set in a different performance space in the building. Eaton directs both versions.