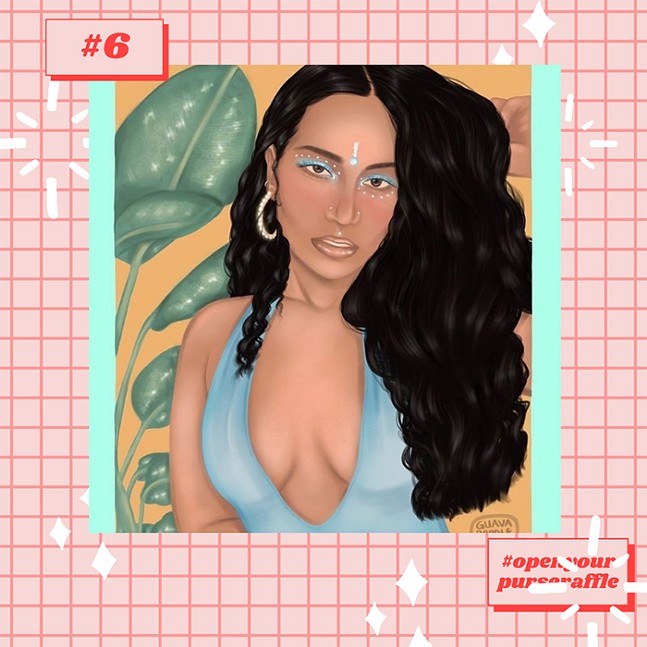 Image: Courtesy of #ChangeRapeCulture PGH and True T PGH
Artwork from @guavadoodle from #OPENYOURPURSE raffle
Drag shows work best in person, as performers get to interact with and rile up the crowd, who in turn generously offer up tips. With COVID-19 putting a stop to these intimate events, people like Taylor Waits, co-founder of #ChangeRapeCulture PGH, worries how drag acts could be forced into performing for in-person events that put them at risk.

“Once corona hit, it became very unsafe,” says Waits, who, as a DJ, understands the pressure on entertainers now weighing how to make a living.

As a result, Waits, a Pittsburgh transplant who, while living in Texas, started the #ChangeRapeCulture rape-survivor advocacy group with co-founder Kimiya Factory, partnered with local LGBTQ community organization True T PGH for the #OPENYOURPURSE Digital Drag Show. Taking place live from True T Studios on Sat., Jan. 16, the “all-queer run production” will serve as a showcase for local queens. It will also include a day-long series of raffles on the @crcpgh Instagram page, giving away “queer-focused art pieces,” tattoo and photography sessions, and more as a way to highlight LGBTQ artists of color.

“We wanted to do something that could actually give back, do something that was fun, and support people out of work in these industries,” says Waits, who serves as the event program director and calls the show an “all-around queer-people-get-to-be-themselves fest.”

They wanted to advance the content as well by trying to make it as interactive as possible. This includes hooking cameras up to performers and presenting it in a way that would “mimic someone giving a tip to a queen.”

“We want it to feel like you're at a drag show,” says Waits, adding that someone will hand cash tips to the performers live as viewers watching at home make their donations online.

Similar to the #OPENYOURPURSE initiative that encouraged celebrities to support the Black Lives Matter movement over the summer, Waits says the event pushes non-Black people in privileged positions to give directly to members of the Black community, which has been disproportionately impacted by the pandemic.

“There are people who need money now,” says Waits, who also expresses her surprise at the lack of financial resources for artists in Pittsburgh.

Besides increasing awareness of and supporting artists and performers, #OPENYOURPURSE will also put tickets sales towards $20,000 for two GoFundMe campaigns. One helps Khadijat Yussuff, a Black agender/asexual multimedia artist and current artist-in-residence at True T PGH, take steps to become a programmer and game designer by attending classes at Community College of Allegheny County. The other will help Texas law student and trans rights activist Guilly with medical expenses related to his top surgery.

Waits also sees the event as challenging local producers and arts patrons to “think outside the box” when it comes to recognizing the breadth of talent in Pittsburgh, as opposed to being clique-y and doing “the same five things with the same five people.”

“It's time for Pittsburgh to have some new talent,” says Waits.