Op-ed: We’re Striking To Tell UPMC to Respect Our Rights

A statement on the Oct. 4 strike from Christoria Hughes, a dietary technician at UMPC Presbyterian Hospital 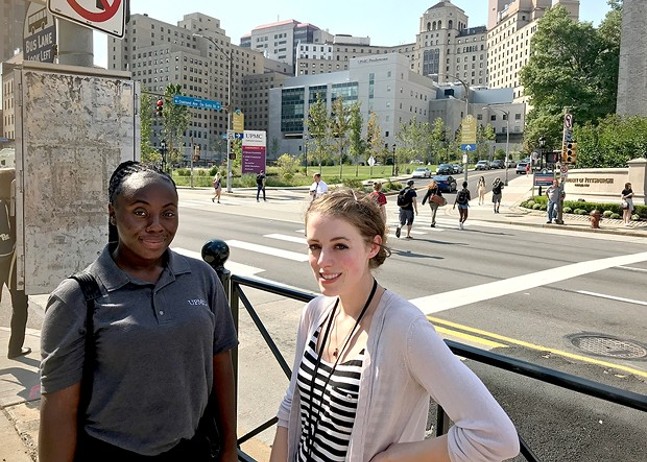 CP photo: Ryan Deto
UPMC employees Ashley Smith (left) and Ellie Lalonde (right) in front of UPMC Presbyterian in Oakland
I have been a dietary technician at UPMC Presbyterian Hospital for ten years. I take a lot of pride in the work that I do. A hospital the size of ours functions like a small town, and keeping medical staff, patients, and visitors fed keeps the whole thing going. And as a lifetime resident of Pittsburgh, I also take a lot of pride in knowing that healthcare has become the foundation of Pittsburgh’s economic resurgence, and that hospital workers like me are the engine behind Pittsburgh’s “ed and meds” economy.

UPMC has enjoyed a prolonged boom — the company took in $1.3 billion in profits in 2017, is embarking on a new $2 billion expansion plan, and is advertising to “destination” patients in the New York Times. Naturally, that success leads workers like me, the women and men who make UPMC run day to day, to hope we’d be treated by our employer with respect, dignity, and a spirit of cooperation.

But as you may have heard, that is not how UPMC treats us. As the National Labor Relations Board found in two August decisions, UPMC acts with egregious disregard for its workers’ federally protected rights to support a union. It threatens us with the fear of losing our livelihoods, forces us into “coercive interrogations,” misleads staff about the rights we have, creates illegal policies that prevent us from organizing, and it forms company-dominated “worker groups” that are supposed to act on our behalf. It has even unlawfully fired workers for supporting a union. So today, I’m joining my coworkers from every UPMC facility in Pittsburgh in walking off the job to demand UPMC starts respecting our union rights.

Over the years, UPMC and its hospitals have been charged with 150 violations of workers’ rights by the NLRB. In fact the unlawful terminations cited in the August 27th decision, which is known as UPMC II, date back to 2013. Think about what that means for the people who lost their jobs, for daring to believe that they and their co-workers were entitled to a reliable pathway to the middle class.

That’s five years of lost wages, five years of waiting in limbo, five years of having your humanity denied by the biggest employer in Pennsylvania. I watched those men, who were my coworkers, fired because they dared to dream big, and I have watched them and their families struggle after losing their main source of income. I owe it to them to strike on Thursday.

The NLRB decision in August requires UPMC hospitals to remedy all violations of workers’ rights, including restoring fired workers to their positions with back pay, rewriting illegal policies that prevent us from organizing, and to read a statement of workers’ rights aloud to every employee. But instead of apologizing and getting down to work, UPMC is again choosing to object and appeal.

Pittsburghers are steeped in the history of the steelworkers who formed their union to turn dangerous, underpaid work into a good living, safer working conditions, and a voice in politics. We need to do the same with eds and meds. In a city with so little authority over wages, workplace safety, or patient care standards, we need the collective power of the union to ensure that caregivers have a real and protected voice in the workplace.

Delays, intimidation, firings, harassment, and fear – this is how UPMC tells workers that they don’t matter and that their hopes and aspirations count for nothing. They want workers to know that the law won’t protect us, that elected leaders won’t hold them accountable, and that we would do best to give up. We are striking this week to tell UPMC executives that far from giving up, we’re getting louder. We’re calling on elected leaders to use their strength to make it easier, not harder, for workers to join unions. And we are joining with our neighbors and communities to say enough is enough. No more delays from UPMC. No more turning the other way. And no more surrender of our city’s resources and land to private interests who refuse to involve us in decision making.

Decades of attacks on workers’ organizations by bosses and politicians have left our economy more unequal and precarious than it has been in decades. We cannot have a just economy if workers are barred from bargaining collectively. As workers in our country’s biggest industry and our state’s biggest employer, we know what our responsibility must be. We are asking you, our community, to join us Thursday in delivering a simple message to UPMC: Implement the NLRB’s orders, stop violating our rights, and allow a free and fair process for caregivers to form their union.

Christoria Hughes is a dietary technician at UPMC Presbyterian Hospital in Oakland.

What can Pittsburgh Public Schools do to dig out of a $39 million budget hole?