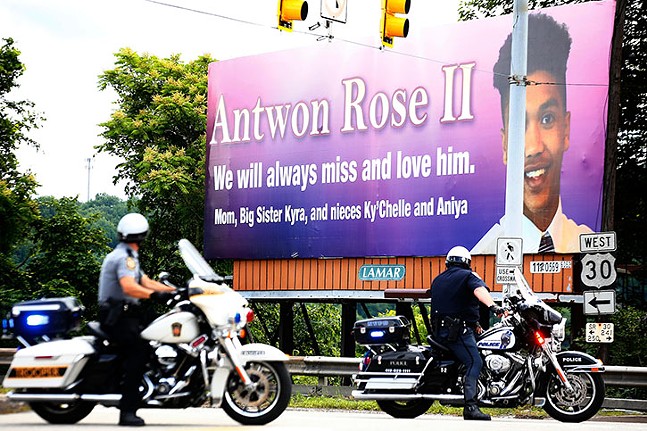 CP photo: Jared Wickerham
A billboard in honor of Antwon Rose Jr., photographed during a march and balloon release on the two-year anniversary of his death, on Fri., June 19, 2020.
During last week's Pittsburgh Steelers season opener, Alejandro Villanueva once again made himself a spectacle at the expense of the memory of slain Black American citizens. There are more eloquent ways to begin an essay, but it has become tiresome to try and find graceful words to comment on the mental gymnastics of those who contort logic and statistics to avoid saying what they really think: Black people who are killed by the police often deserve it.


As part of the NFL’s End Racism campaign, the Pittsburgh Steelers, as a team, decided to honor the memory of Antwon Rose Jr., killed in 2018 by East Pittsburgh Police, with a decal on the back of each player’s helmet bearing his name. Villanueva, a former Army Ranger, taped over the decal with a different name: that of Sgt. 1st Class Alwyn Cashe, who is Black. In the ensuing days, the conversation quickly shifted from the memory of Rose to Villanueva’s action and stories about Cashe, and then back to Rose as the conservative media got hold of the story and began resurfacing old, debunked theories about Rose’s involvement in a drive-by shooting.

That’s the old, familiar dance of culpability bargaining. Even the most vile right-wing media pundit knows that to say any victim of a police killing is deserving is abhorrent. So instead of saying it outright, it becomes a game of creating an implicit judgment from an avalanche of bad faith character assessments. Villanueva’s stunt is one of creating a hierarchy of sacrifice, and football media members who fall in line, or teammates that suddenly begin questioning their judgment because of his action, are equally complicit. For them, there’s always someone more deserving of honor, someone whose sacrifice was greater, some reason why reminding people of someone killed at the hands of an over-militarized and increasingly violent police force is a sinful practice.

In Villanueva’s case, it was the sacrifice of Alwyn Cashe who died in 2005 after suffering horrific burns while saving fellow soldiers from a transport vehicle that was aflame after encountering an IED in Iraq. Cashe deserves his honor, and to remain in the memories of those who grieve his loss. However, it’s reasonable to argue that he already has been and continues to be honored, given the military awards he received and the ongoing campaign to award him the Medal of Honor. In fact, soldiers are honored rather frequently, due to how consistently we’re reminded — in politics, on television, on the news, during the NFL’s own Salute to Service — about the brave sacrifices made by the men and women of the armed forces who are thrust into endless wars by Congress, regardless of which party is in power.

Even foregoing the unbalanced ratio of who gets attention and who doesn’t in modern American media, when Villanueva made his decision, what he also created was an implicit ranking of which sacrifices are worthy of attention. Antwon Rose was shot three times in the back by a police officer in 2018, killed on the scene. By acknowledging it as tragic but deflecting honor towards Sgt. Cashe, the message is this: the sacrifice of the Rose family is simply not as important as the sacrifice made by someone who died for his country overseas.

And that’s the charitable reading. The far less charitable reading, which seems to be supported by the sudden 180 done by teammates Vince Williams and Maurkice Pouncey in the days since, is that Villanueva feels that Rose doesn’t deserve to be honored or recognized at all. That he deserved to die because of retroactive assertions about his involvement in a drive-by shooting by a police force desperate to make sure the public remained on their side. 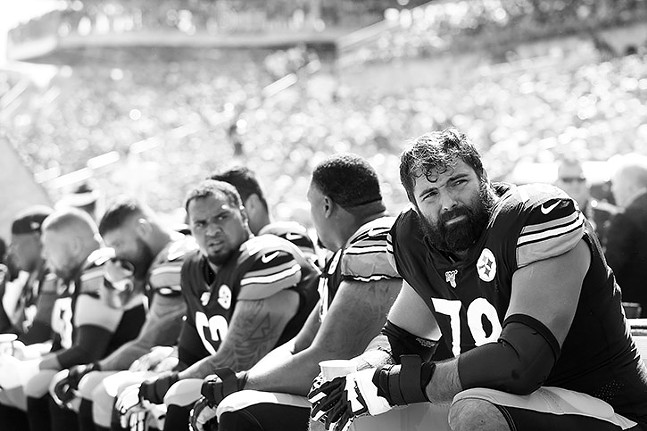 CP photo: Jared Wickerham
Alejandro Villanueva of the Pittsburgh Steelers sits on the bench during a game against the Seattle Seahawks on Sun., Sept. 15, 2019 in Pittsburgh.
In the days since the Steelers opening night, local football and news media have been in complete chaos. There’s a full relitigation of the circumstances of the execution of an unarmed citizen, and the most vile hucksters on the planet have latched onto it. The top-trending articles on Pittsburgh media sites in the days after the stunt are years-old news items about Rose’s possible culpability in his own death, impotent flailing attempts by those working for the state to muddy the waters of guilt and innocence so that one of their own could walk away from consequences for a killing. Users even attempted to edit Rose’s Wikipedia page with inaccurate, incomplete, and hateful information in order to try to change the public record about the circumstances of his death. The COVID-19 conspiracy peddlers and “just asking questions” race baiters at Outkick the Coverage sports media site latched onto the story, making sure to amplify the fact that Rose was “involved” in a drive-by shooting, despite never firing a weapon and no evidence of his involvement besides his location.

If there’s any doubt about Villanueva’s selflessness versus his selfishness in the act of honoring Cashe, one need look no further than the predictable outcomes of the past week. It’s not Cashe’s name that dominates the discussion but rather Rose’s, and it’s once again about throwing dirt on the name of a dead high schooler. He could’ve claimed ignorance about the blowback from his actions in 2017, when he first broke from his teammates by emerging from the tunnel for the national anthem while the rest of the Steelers hung back in solidarity with anthem protests around the league. Given that it played out exactly the same way then (very little discussion about his gesture compared to the targeted slander of Colin Kaepernick), he can’t expect anyone to believe he didn’t see this coming.

This was all inevitable. As soon as the NFL decided three years after Colin Kaepernick first knelt in protest of police treatment of Black Americans that they would embrace a limp social justice message — broad calls for unity were booed at Kansas City on NFL’s opening night — it was only a matter of time before they created a powder keg. The most conservative sports league in America could never survive an entire season of doing the bare minimum to pretend it cares about the Black people who help them rake in billions each year. But, one could hope they could’ve made it through a week at least, and selfishly, a Pittsburgher who doesn’t spend his or her time worshipping at the Blue Lives Matter altar might have hoped it would happen with another team. It’s always nice for fans when you’re able to have some plausible deniability in your ethical role in supporting a sport that consistently props up our most violent, base urges.

Perhaps most painful is that all of this frenzy is about a tame, unremarkable gesture at its center. It should not be controversial to believe that Antwon Rose should be alive today. It should not be controversial to feel that the police should not shoot unarmed Black people in the back. It should’ve been the easiest show of solidarity possible, a passive action that requires nothing more than slipping a helmet on in the same way you do any other week. The team was not requiring players to sign a pledge against law enforcement, or a commitment to political action in the community. It was the name of someone from our community who was taken from us, a way of quietly reminding everyone that sacrifices abound in America, especially among those who we don’t spend every waking hour celebrating in the media, in sports, and in politics.

Gestures like the ones the Steelers made by honoring Antwon Rose are a drop in the bucket compared to how often we honor our fallen soldiers.

There is no Memorial Day for unarmed Black men and women murdered by the police. There are no holidays to commemorate and honor the memories of countless Black people who were slaughtered throughout the course of American history. The NFL does not spend an entire month amplifying (and monetizing) support for the Black community as it does when it sells camouflage military-themed team gear for the armed forces. Gestures like the ones the Steelers made by honoring Antwon Rose — aesthetic in nature, the bare minimum that an immensely profitable community pillar can do to combat violent policing — are a drop in the bucket compared to how often we honor our fallen soldiers. What Villanueva did in 2017 and in 2020 is a clever, impenetrable way of All Lives Matter-ing the death of Antwon Rose by wrapping his insensitivity in the American flag. There were ways of honoring Cashe without sacrificing the memory of Rose. Anyone who endorses his decision, or brushes it off as a result of his lived experiences in the service, is creating unnecessary complexity around a rather simple sentiment: they don’t believe that Antwon Rose deserves to be honored.

And it’s for this exact reason — the craven need to turn away from the inequities of being Black in America to avoid spoiling our collective fun — that it’s important the players carry his name on their helmets.
Casey Taylor is a freelance writer based in Pittsburgh. His work has appeared in The New Republic, Vice, Deadspin, and others.

A changing story by police on a rural Pa. shooting helped fuel white vigilantes and misinformation