Dr. Rachel Levine serves tirelessly as Pennsylvania’s Secretary of Health. Her professionalism and dedication to the health of all Pennsylvanians is demonstrated daily in her updates on the spread of COVID-19. She has also served as Pennsylvania's Physician General and as a Professor of Pediatrics and Psychiatry at the Penn State College of Medicine.

Dr. Levine graduated from Harvard College and the Tulane University School of Medicine and completed a residency in pediatrics and fellowship in adolescent medicine at the Mount Sinai Medical Center. Her credentials are impeccable, and Pennsylvania is lucky to have her on our side during this health crisis. 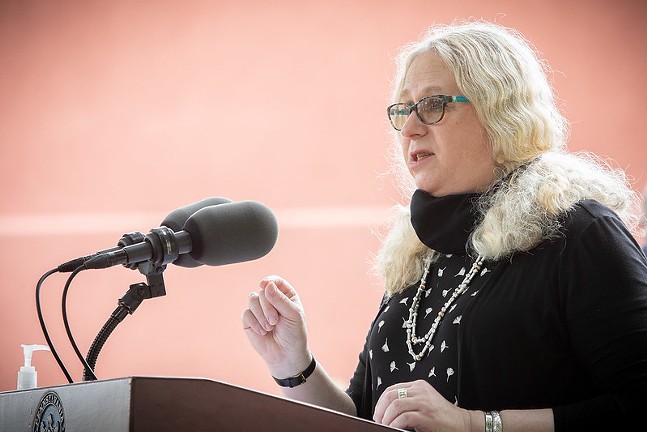 Pennsylvania Secretery of Health Dr. Rachel Levine
How do some citizens of the Commonwealth repay her hard work? With ridicule. At the “fundraiser” at the Bloomsburg Fair which included a dunk tank where a man wore a dress and wig meant to resemble Dr. Levine and the recent disrespect in the form of a menu from the Crossroads Tavern in Morris Township mocking her with a reference to testicles on their 50 cent menu, mean-spirited and ignorant people have made the decision to undermine and scorn Dr. Levine. Anyone who watches her daily updates, and makes the mistake of reading the comments made by viewers, can attest to the vitriol, ignorance, and hate aimed at Dr. Levine.

What has she done to deserve this abhorrent behavior? Dr. Levine is one of a small group of openly transgender government officials in the United States.

This uninformed and toxic behavior has bothered me from the first update Dr. Levine presented. But, respecting her strength and professionalism, I followed her lead and left the haters to their dark, depressing lives. Dr. Levine is a strong woman, more than capable of taking care of her own battles. However, the recent event in Shaler Township at a Blue Lives Matter protest has pushed me beyond my ability to remain silent.

A member of a counter-protest group, yelling at the Black Lives Matter rally across the street, began loudly chanting “Kill transgenders!” repeatedly. “Kill Transgenders!” The Black Lives Matter group counted among its members at least a few members of the transgender community. Shaler police officers were present at this gathering. First Amendment rights end when the speech is a threat to another person. How was this man not arrested? “Kill Transgenders!” This is not just ignorance on display. It is not only anger personified. It is a threat. A threat to kill. A threat to kill people who were at the rally.

As the father of a son who is, among many other things, transgender, I am furious. I am appalled. I am disgusted. What I am not is surprised. Members of the transgender community, like Dr. Levine, like my son, like those at the rally, and like those who so bravely walk out of their homes every morning to a world that will not allow them the simple request of existing, are accustomed to this behavior. They are accustomed to the loathing, the ignorance, the pure venom of these hateful people. And that is not OK. It is not even close to OK. It is wrong. It is un-American. It is evil. And it must stop.

Please contact the Shaler Police Department and ask why this man was not stopped. Call the Crossroads Tavern and demand to know what the hell they were thinking. Contact the Bloomsburg Fair and make sure they understand the people of Pennsylvania will not tolerate hate and we have long memories of those who cross that line. And for the love of all that makes us human, speak up when you hear someone ridicule members of the transgender community. Enough is enough.David West is the President of PFLAG Pittsburgh, the local chapter of Parents, Families, and Friends of Lesbians and Gays

What is your voting plan?