OP-ED: Pa. Republicans are claiming election fraud, even while they celebrate their own election victories | Opinion | Pittsburgh | Pittsburgh City Paper

OP-ED: Pa. Republicans are claiming election fraud, even while they celebrate their own election victories 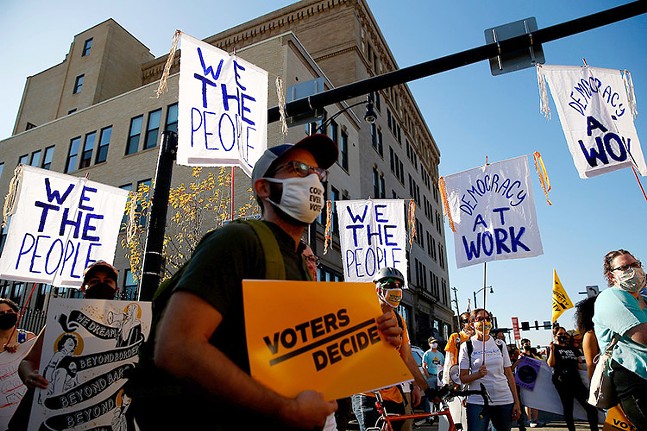 CP photo: Jared Wickerham
Pittsburghers during an "Every Voice Heard, Every Vote Counted" march following the projection of the Biden-Harris win on Sat., Nov. 3.
I did not expect President Donald Trump to take his loss gracefully, but I have to admit I did not expect to see my Republican colleagues in the General Assembly run to his aid and make bad faith allegations about our election.

Sen. Jay Costa
Pennsylvania ran a methodical, secure and accurate election and I cannot stand by while Republicans seek to undermine our most important democratic process.

Our top election official, Department of State Secretary Kathy Boockvar, provided ongoing guidance to voters and counties on how to guarantee that our races were run smoothly and determined fairly. Her leadership was so effective that only one percent of mail-in ballots arrived “naked,” an issue we expected could have led to mass disqualifications of ballots.

The county elections offices across this Commonwealth worked tirelessly for weeks to ensure that the General Election was carried out in accordance with state law and that the results are timely and accurate. Their processes have been transparent and designed to prevent fraud or misdeed of any kind. And while Republicans suggest something improper happened last Tuesday, they haven’t provided any evidence or proof, or the slightest degree of specificity in what they are alleging. They are parroting the untruths sent to them from the White House.

But beyond the dishonesty in the GOP claims, there is also gross hypocrisy.
Fifteen Senate Republicans won in this year’s General Election. They have all claimed victory before the results were certified, but now their first order of business is to discredit the execution of the election. They are claiming there were irregularities and that they have questions about the credibility of the results of the Presidential race; however, it was the same ballots that elected them that carried Joe Biden to victory. They are calling the process fair in legislative races but questionable in the presidential. At best, they do not see the inconsistency here, but at worst, they are pushing a stunning degree of hypocrisy at the behest of Donald Trump.

Their out-going leader has also tweeted incessantly criticizing mail-in ballots and attempting to discredit them based on the length of time it took to count. And even while the PA GOP goes along with that baseless argument, the blame for the delay in counting rests squarely on the shoulders of Republican legislators.

The House and Senate Democrats urged for pre-canvassing legislation to pass the General Assembly, but Republicans held it up. The Secretary of State and the Governor asked for pre-canvassing legislation. County election officers and county executives pleaded with Republican legislators to allow them to pre-canvass. Republican legislators ignored all of these calls. They knew it meant that ballots would be counted a few days later than other states and lead to uncertainty and confusion.

They created the confusion they are now calling suspicious. They are claiming victory in elections they say we shouldn’t trust. They are sowing discord for political reasons and their efforts undermine democracy – we cannot allow this inaccurate narrative to take hold.

Our processes work; our public servants are trustworthy; our election was secure. To suggest otherwise is undemocratic and wrong.
State Sen. Jay Costa (D-Forest Hills) is the Senate Minority Leader for the Pennsylvania state Senate.