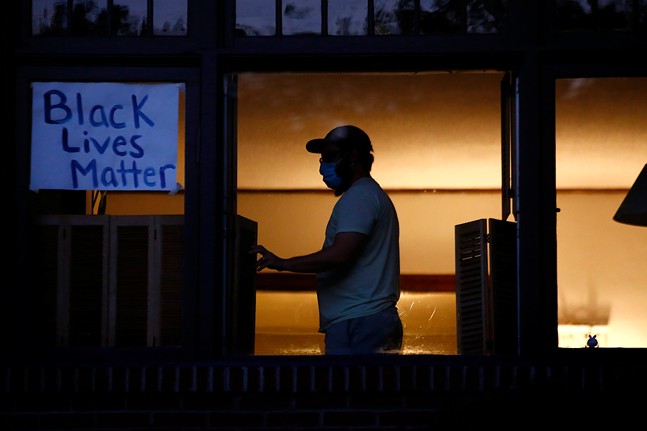 CP photo: Jared Wickerham
A Black Lives Matter sign near Mayor Bill Peduto's house on Hastings Street in Point Breeze
If not in your backyard, then where? Protesters recently descended on the 400 block of Hastings Street, the “Black Lives Matter” signage peppering front porches and windows put to the test. As the Point Breeze home of Mayor Peduto became the target of protests about defunding and abolishing the police, residents met the disruptive cries of injustice, magnified through bullhorns, in varying ways.

As a resident of Hastings Street, I was stunned to discover that my street was not the tolerant, supportive place I’d long believed it to be. Cognitive dissonance — it happens to us all at some point. I’ve come to learn that many of my neighbors are nothing more than performative champions for Black and Brown communities. A "Black Lives Matter" sign prominently displayed in a front yard turned out to be an empty gesture, as this movement was only supported when it was in another area of the city; support is more comfortable to give when the chants of “What side are you on …” take place in a predominately Black neighborhood.

“The protests were disruptive.” “Elderly people on this street were kept up until 3 a.m.” “People had to work the next morning.” “One of the protesters yelled at a neighbor.” “Profanity was being used around children.” “A penis was drawn in chalk on my sidewalk.” This was the rationale thrown around to justify the police presence on the street, the installation of a 360-degree camera at the corner, and the removal of protesters exercising their right to free speech on Hastings Street.

One neighbor explained that she wasn’t racist, attempting to support her claim via a rant about her history of outreach activities in under-served areas of the city. Her tone pejorative; she stated that our neighborhood should not welcome protesters to the street because their disruptiveness was too great to bear. I later watched as she and her husband washed the chalk messages from Hastings Street that they didn’t agree with — essentially erasing free speech.

In this case, the syndrome commonly referred to as "Not in My Backyard" (NIMBY), becomes a dangerous form of covert racism. One cannot claim to endorse racial justice or First Amendment rights if their support is revoked when either one arrives on their doorstep. Additionally, I question whether some neighbors experience a fear of "otherness" when Black protesters chant and yell their demands from the middle of Hastings Street.

We, as white neighbors, cannot support the Black and Brown communities only when convenient, nor can we choose to recognize the right to protest only when comfortable for us. Imagine saying, “You’re welcome to come protest from 1-1:30 p.m. on a Thursday, but only if you’re quiet and polite.” It is not for us to choose how others protest or raise their voices to be heard.

Racial justice is not about our level of comfort. To claim allyship, but only when it’s on your terms is racist. I question whether many of my white cohorts understand this. While you may not consider yourself to be racist, calling on NIMBYism, turning your back on your Black and Brown neighbors when it doesn’t suit, and dismissing their protests from your street is, in fact, racist.

So, I ask again, if not in your back yard, then where? Are we, the neighbors of Point Breeze, only comfortable when disruptive protesting remains in areas of color and poverty? Do we assuage our guilt by placing a sign in our window, mentioning to a friend, “I support the Black community,” and volunteering our time in under-served areas (partially to inflate our CVs)? Is the personal disruption of a protest really greater than the injustice of simply being Black in America?

If you refuse to support the fight for Black lives, take down your sign.The author lives on the same block as Pittsburgh Mayor Bill Peduto, where protesters stayed overnight on Aug. 18 and near where police escalated action against protesters on Aug. 19.