Despite many generic tropes, this is a heartfelt tribute to a crew of fallen firefighters 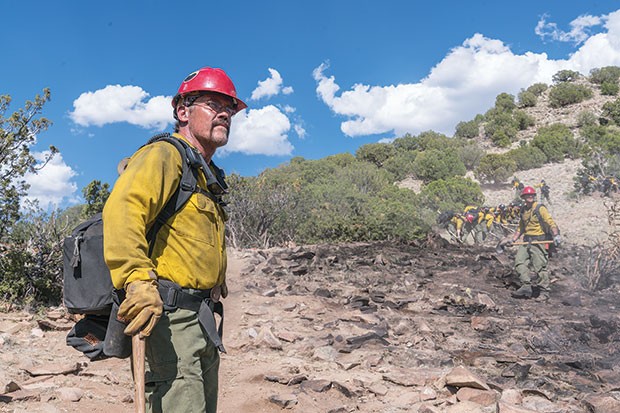 From its cheesy poster, title and tagline — “It’s Not What Stands in Front of You, It’s Who Stands Beside You” — you’d expect this film about a group of real-life firefighters to be a truckload of tropes about manly heroes. And Only the Brave, directed by Joseph Kosinski, definitely trades in plenty — from its classic-rock soundtrack and sweaty training montages to blue-collar totems like cowboy hats, pickup trucks and cans of Budweiser. The screenplay is adapted from a GQ article that told the story of a group of Prescott, Ariz.-based firefighters — the Granite Mountain Hotshots — 19 of whom died fighting the Yarnell fire in 2013. Thus, the memory of the event provides emotional ballast to the formulaic fare, and Only the Brave bests its Hollywood creation to become a heartfelt tribute, yee-hawing bro pranks and all.

The work is helped immeasurably by a sturdy cast, who elevate the mostly hacky dialogue. Josh Brolin plays Eric Marsh, the gruff, teddy-bearish leader; Miles Teller is the newbie; and James Badge Dale and Taylor Kitsch portray the other featured firefighters. The always-great Jeff Bridges turns up as the town’s fire chief and Marsh’s mentor. (Bonus: Bridges taps his musical side, in one scene delivering a lively version of “Ghost Riders in the Sky.”) For a story about men being men, Jennifer Connelly, as Marsh’s wife, gets a bit more screen time than the usual worried-wife-on-the-phone role. There are even a couple of meatier scenes where she and Marsh give their characters a few grace notes of complexity.

The tale unfolds leisurely: Viewers spend the first 90 minutes mostly goofing with the guys, and learning some of the basics of fighting wildfires. It’s tough physical work — digging, tree-chopping, brush-clearing and setting controlled fires, in the heat and rugged terrain. Good cinematography captures the endless vistas of scrubby desert and pine-covered mountains. (“Fuel,” Marsh only half-jokes, when taking in the scenery.)

Only after we’ve gotten to know the dudes (sort of), and what they do, does the film take us to the fateful Yarnell fire. And even then, the material is handled sensitively and with a minimum of juiced-up action footage. Instead, the film shows the men behaving steadily, professionally, when the fire unexpectedly shifts and endangers them.

There’s a wrap-up when the tight-knit community learns of the deaths. There was a lot of sniffling in the theater, and packing a bandana wouldn’t be a bad idea. When all the Hollywood stars have left the screen, it’s a heartbreaking reel of snapshots of the 19 men who died, posed with their families, celebrating events and fighting fires.

Even more over the top than the first, Deadpool 2 ups the comical violence, cultural references and lewd humor

Thank You for Your Service