Online exhibition about brewing in Pittsburgh and Pa. launches from Brew: the Museum of Beer 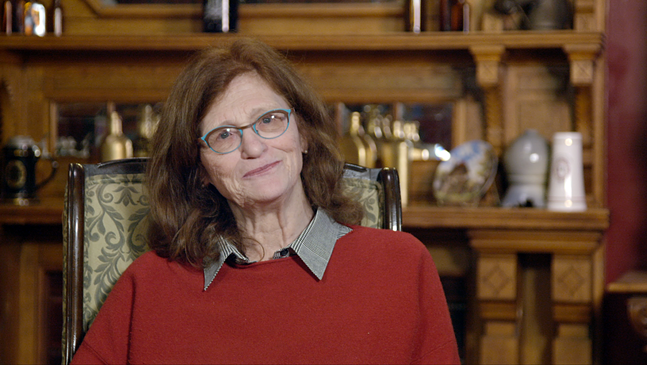 Brew: The Museum of Beer
Stoudts Brewing Company founder Carol Stoudt in The Story of Beer in Pennsylvania
In the years since Joe McAllister first decided to open a beer museum in Pittsburgh, he's learned a few lessons, mainly that it takes more than two years to open a museum.

“Turns out that was a little optimistic,” laughs McAllister, who first embarked on what would become Brew: The Museum of Beer with former partner, Matt Sherwin, in 2016, with plans to open in 2018.

McAllister remembers being told how another niche museum, the Rock & Roll Hall of Fame in Cleveland, OH, after which Brew is modeled, took 10 years to open.

Undeterred, he decided to start over with an online exhibition giving the public a taste of what to expect from what McAllister thinks would be a huge tourist draw for the city.

Opening today, The Story of Beer in Pennsylvania, a project supported by a grant from the Pennsylvania Liquor Control Board, showcases “the legacy and significance of Pennsylvania beer, from the origins of Penn’s Colony through the significant craft beer scene today,” according to a press release. The exhibition includes video interviews with brewers and beer historians, as well as resources like an interactive map of active breweries in Pennsylvania and a searchable list of Pennsylvania’s Great American Beer Festival winners.

McAllister is a medical professional who started the autism center at the UPMC Children's Hospital of Pittsburgh and originated the Psychological Services Department at the Watson Institute in Sewickley, Pa. He says he first came up with Brew while doing consulting work in Ireland, where he visited the Dublin-based Guinness Storehouse museum.

“I came home and was researching what there was in the United States, and was shocked to find that we really didn’t have a beer museum in the country,” says McAllister. “There were factory tours but nothing really doing the whole story of beer.” 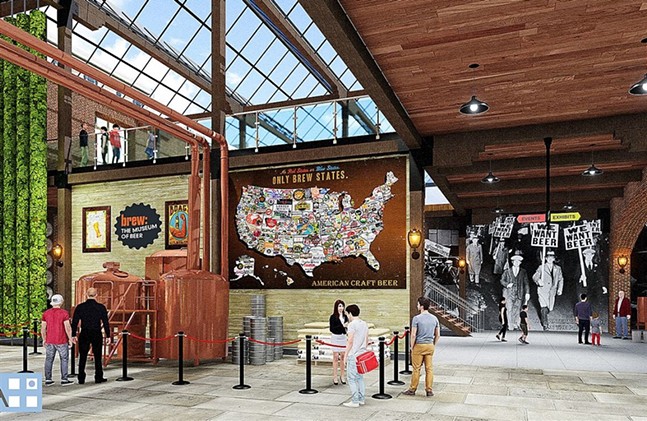 DLA+ Architecture & Interior Design
Early concept art for Brew: The Museum of Beer
Highlights of The Story of Beer in Pennsylvania include an interview with Carol Stoudt, the founder of the Adamstown, Pa.-based Stoudts Brewing Company, who is known as the first female brewmaster since Prohibition. Also featured is a Kittanning man with an 8,000-square-foot facility dedicated to a beer memorabilia collection that includes items from as far back as the 1800s.

The exhibition opens tonight during a live Zoom presentation led by McAllister, brewer Paul Young, and Lauren M. Churilla, a curator at the McCarl Coverlet Gallery and Lecturer of History at Saint Vincent College.

Churilla will speak on one of the many intriguing aspects of local brewing history, that of an embattled brewery opened by Benedictine monks around the late-1800s in Latrobe, Pa.

“Beer has a lot to do with immigration, particularly German immigration, and there was a lot of anti-immigrant sentiment and religious intolerance,” says McAllister, describing how the brewery, which was the first monastic brewery opened in the U.S., came up against a staunchly pro-temperance bishop. “It was very controversial in the town, and how the Benedictine monks and the brewery were corrupting the population. The end result was the brewery burned down in a mysterious fire in the 1920s.”

This is just one aspect of what McAllister sees as a rich and storied history that defines the region and the state, dating as far back as the French and Indian War when troops were stationed at what is now known as Fort Pitt.

“The soldiers there essentially said, 'If you’re going to keep us out here in this godforsaken place in the middle of nowhere, you have to put in a brewery for us,'” says McAllister, adding that American brewing came from the desire to assert the country's independence by not importing beer from Great Britain.

He adds that around 10% of the future The Museum of Beer will cover the entire history of beer in Pennsylvania. The museum vision encompasses a 50,000-square-foot complex able to accommodate over 400,000 visitors per year. Features would include a collection of beer artifacts and exhibits outfitted with state-of-the interactive art technology, as well as a 300-seat brewpub, event space, gift store, and Beer Hall of Fame.

McAllister says The Story of Beer in Pennsylvania will stay online “indefinitely,” with more content being added to it over time. Meanwhile, he wants to kick off 2021 by looking for investors in the project, which he believes will take about $2 million to reach a next phase that includes "committing to a property and completing the formal design phase." He and his team also plan to identify the perfect location for the museum.

While some may think that The Museum of Beer would only appeal to beer enthusiasts, McAllister points to how the Guinness Storehouse draws around 1.7 million visitors a year.

“Those aren’t all beer fanatics,” says McAllister. “We intend to be more expansive. We want to be interesting,, we want to be fun, we want to be entertaining, as well as teaching visitors about this amazing substance that has been with us and, possibly, partly responsible for the start of civilization.”