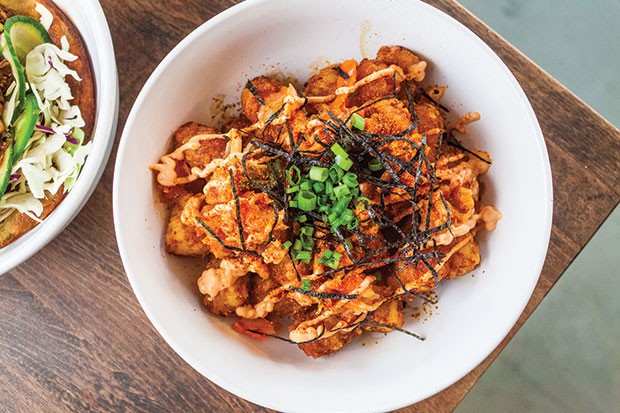 Name a restaurant that someone hasn’t heard of, and a likely response will be, naturally enough, “What kind of restaurant is it?” Usually, the answer is straightforward: Italian, Ethiopian, seafood, diner. Even “fancy,” while not really descriptive of food, gets at something essential about the dining experience. But to say a restaurant is vegetarian or vegan is hardly descriptive at all, defining it only by what it doesn’t serve.

And then, some restaurants defy easy description. Even after dining at Onion Maiden in Allentown, we’re hard-pressed to categorize it. That’s a good thing; Onion Maiden’s quirky singularity of vision is one of its most appealing traits.

Yes, it’s a vegan restaurant, but both its ambience and menu defy the sanctimonious stereotype of earthy-crunchy, hippie food. Nor is this a virtual tour of meat-and-dairy-free cuisines of the world. Onion Maiden’s first unexpected move is its punked-out, plant-based vibe, in which heavy-metal-concert posters coexist with pretty little pots of succulents arrayed just so on salvaged wood shelves. Its second is its mash-up of veganized American finger foods like hot dogs, tater tots and nachos, with trendy, often Asian-inflected, dishes such as dumplings, tacos and noodles. Music, played at a volume that barely qualified as “background,” bounced from Motörhead to The Who to the Sex Pistols, and dish names are witty references to the music at the center of Onion Maiden’s heavy-metal-inspired concept.

For example, Aqua Poutine Hunger Force was a bowl of crisp-fried tater tots tossed with cashew cheese curds, draped with gravy, and sprinkled with zingy fresh chives. The tots had a slightly lumpy (in a good way) texture that reminded us they were home-made from real mashed potatoes, not unfrozen clumps of processed potato flakes from a 1950s supermarket, and a deliciously craggy coating that caught and held the gravy. Cashew cheese is no replacement for the fresh, tangy curds in traditional poutine, but the savory, light-brown gravy was better than what you’d get at most non-vegan taverns and made every bite delicious.

Chivelords — crispy dumplings with Chinese chives — were flat patties, resembling croquettes more than traditional dumplings, with a filling that split the difference between onion and braised greens. A drizzle of both sesame and soy gave them a distinctively Asian flavor profile.

The Roots, a nice-sized salad, augmented big, beautiful leaves of mixed greens with earthy chick peas and batons of roasted carrot and beet, making for an attractively colorful presentation. The roots themselves were perfectly cooked, sweet and firm without a hint of rawness, and played well against a tangy miso-ginger dressing that was one of the better exemplars of its type: thin, smooth, and balanced between pungent ginger and mellow miso.

The Trooper Dawg is Onion Maiden’s version of a chili-cheese dog, a veggie wiener smothered in lentil chili and cashew cheese. The lentils, hearty and deeply seasoned, and the good crusty Breadworks bun were the stars of this show. The “dawg” was different not only in flavor, but in texture than a traditional frank, lacking ballpark snap and resilience. In our opinion, most vegan meat and dairy substitutes are not an automatic demerit, but require an adjustment of expectations. That is, one who expects a faithful imitation of an all-beef hot dog will not have that expectation met. However, one who is open to a different sort of tubular protein in a bun might very well be pleased.

Coffins — scallion pancake tacos with jackfruit, enoki, cabbage, jalapeño, kale, soy sauce and Chinese five spice — were an even more liberal interpretation of the original, inspirational dish. Spiky southeast Asian jackfruit has recently exploded in popularity as a meat substitute; it shreds up beautifully and easily takes on flavors the way chicken does, offering just a hint of fruity sweetness of its own. At the heart of these tacos, enfolded by flaky-chewy scallion pancakes along with an exciting combination of textures and flavors, jackfruit made for an utterly original, absolutely delicious dish, reminiscent of a great banh mi.

Headbangers Balls was another extraordinary innovation: Superball-size tofu croquettes, perfectly fried and flavored with lemongrass and ginger, on twin beds of black rice and cabbage slaw with cilantro chutney and peanuts. Sturdy textures and fresh flavors mixed with aromatic seasonings and spices for an Asian dish to rival — if not utterly outshine — any made with chicken, fish or pork.

There are good restaurants, and there are great restaurants of all types, but seldom is there something as delectably original as Onion Maiden.