"One of the key songs on the record is 'Harvey Haddix,' which is a song about a Pirates game from 1959 -- 50 years ago. So right away, we're playing the local angle!" | Music | Pittsburgh | Pittsburgh City Paper

"One of the key songs on the record is 'Harvey Haddix,' which is a song about a Pirates game from 1959 -- 50 years ago. So right away, we're playing the local angle!" 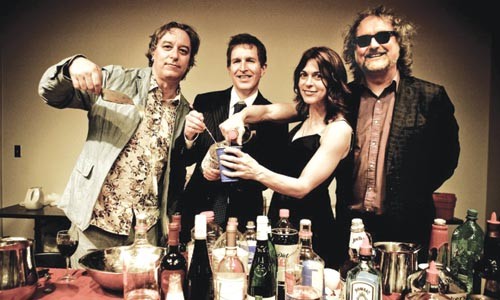 After recording a haunting "desert trilogy" of albums in Tucson -- some of his finest work to date -- Steve Wynn sought out very different environs for 2008's Crossing Dragon Bridge. Wynn, who fronted seminal "paisley underground" rockers Dream Syndicate in the 1980s, recorded the album quickly in Ljubljana, Slovenia, exploring both quieter folk and epic strings -- sounds both more intimate and grander than his trademark Velvets-inspired guitars.

He's also recently seen through two ventures long in the making: collaborating on The Baseball Project (Yep Roc) with The Minus 5's Scott McCaughey and REM's Peter Buck, and marrying his girlfriend and drummer of 15 years, Linda Pitmon. The whole gang visits Club Café Wed., Sept. 16, for a kind of loose musical revue -- or perhaps, celebration.

How did The Baseball Project album come together?
I'd been talking about [a baseball-themed album] for years, and Linda would say to me all the time, "Just stop talking about it and just do it before somebody else does." I was at a party for the REM Hall of Fame induction a couple of years ago, and ran into Scott McCaughey -- I knew him from over the years, but I didn't know he was such a big baseball fan. It turned out he had the same idea. ... Rather than race to see who could do theirs first, we just combined forces.

You've mentioned writing about the baseball players almost as folk heroes.
Right, because they're just great individuals with great stories that are as worthy of a song as, say, Pretty Boy Floyd.

What do the songs offer to someone whose hometown team is the Pirates?
Well, of course, one of the key songs on the record is "Harvey Haddix," which is a song about a Pirates game from 1959 -- 50 years ago. So right away, we're playing the local angle!

It's a song about somebody who just kind of flirts with perfection only to see it slip away from his grasp at the last minute. To be like completely in your zone, in the right place, everything is going right ... is it a great tragedy to be perfect for 99 percent and blow it in the last 1 percent? Or is that still a great performance, a great thing in your life?

And people who aren't sports fans?
If you look at what the songs are about, they're pretty universal stories. A song I wrote about Sandy Koufax, it's really about the notion of quitting something at the top of your game just because you don't have the heart for it anymore. ... It's really the same thing as what Neil Young says -- "Is it better to burn out or fade away?" It's sort of a universal subject. So if you don't know who Sandy Koufax is, you can appreciate the message.

The funny thing about this record is that it was really popular in Europe.

That seems really weird to me.
It's really weird to me, too! But we just played our first show as The Baseball Project two weeks ago at this festival in this old historic, UNESCO-protected city up north in Spain. I was amazed to see this whole Spanish audience singing along with these songs. I'm thinking, "What can this possibly mean to you?" But I think first of all, they're catchy tunes.

From your performance on the David Letterman show, it looks like you're having a lot of fun with this band.
This whole tour is a lot of fun, because we're getting a chance to play each other's songs, and the songs we did together and mix them all together and get to know more about each other onstage and offstage, which is just really one of the many reasons you go on tour.

In fact, it's not only the Steve Wynn, Minus 5 and the Baseball Project -- there's songs from Young Fresh Fellows, Scott's other band, and Dream Syndicate and Gutterball, my old band. So it's really kind of our shared histories for the last 25 years all mixed up together.

Last question: How do you decide to get married after 15 years?
You know, being married has been so great that I probably should have done it 15 years ago! Things happen in their time. We always joked that we probably spend more time together in close proximity than most couples do in their lives ... in vans, hotel rooms, backstages. So if we can still be best friends after 15 years, as we are, then I think we can pretty much say that's how it's going to be for life.