One Man, Two Guvnors at the Little Lake Theatre 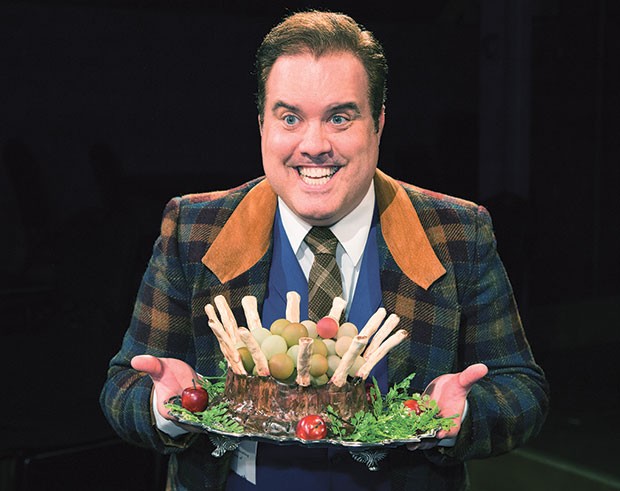 Work sucks. That old adage is at the forefront of One Man, Two Guvnors, now playing at Little Lake Theatre. Based on Carlo Goldoni’s The Servant of Two Masters, this 2011 British play by Richard Bean updates the source material’s Italian setting to 1960s Brighton, England. The setup is simple enough: Francis (Tom Protulipac) is a down-on-his-luck ne’er-do-well who finds himself suddenly upgraded from aimless to over-employed, when he is hired simultaneously by two bosses. Of course, things aren’t as straightforward as they seem: The two bosses secretly know one another, and Francis must struggle to keep his double-employment under wraps. Cue the disguises, half-brained schemes and mistaken identities characteristic of slamming-door farces.

Fortunately, One Man, Two Guvnors rises above the usual fare with its high energy, and under the direction of T.J. Firneno, the cast more than delivers. Protulipac is an accomplished physical actor, and his monologues are a frenetic joy to behold. In them, Francis balances his work commitments with his food obsession — this show cycles through more menus than a four-star restaurant — along with his budding attraction to the feisty Dolly (a delightful Erin Bock), an assistant to one of Francis’s governors. To up the irreverent ante, between scenes, the cast performs offbeat doowop-style songs written by Grant Olding. These serve as fun interludes in a rapid-fire show during which it’s almost difficult to catch your breath.

However, the play is not without its missteps. Many jokes exploit the mid-century setting, and although the time period is rife with comic possibilities, more often than not, those deliberately dated bits fall awkwardly flat. In fact, setting the show in the 1960s seems an almost curious choice, considering that it would work more or less as well in any decade. Furthermore, anybody seeking a sympathetic storyline should look elsewhere. With self-serving motives always at the forefront, there’s not an entirely likable character in the bunch.

But Firneno directs the ensemble with impeccable timing, and the actors give winning performances all around. The end result had the audience roaring throughout the two-hour-plus running time on opening night. While the bawdy humor is certainly not for everyone, One Man, Two Guvnors is an ideal night out for those looking to cut loose with a show that’s anything but austere.

A Masterpiece of Comic … Timing at Little Lake Theatre