One Flew Over the Cuckoo's Nest

This is the best show I've ever seen at Little Lake 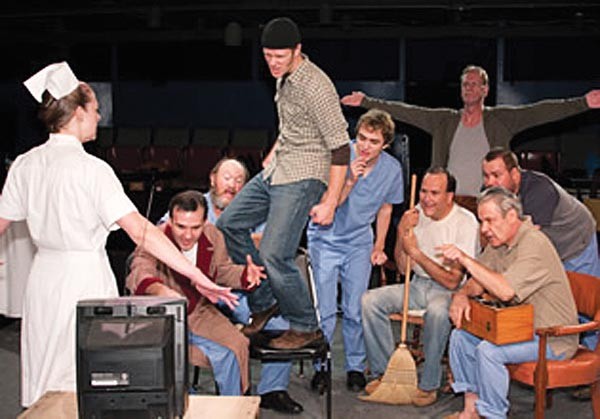 Little Lake's One Flew Over the Cuckoo's Nest

ONE FLEW OVER THE CUCKOO'S NEST

It's impossible to see a stage play of One Flew Over the Cuckoo's Nest without thinking of Jack Nicholson — which is sort of absurd. The story began as a 1962 novel by Ken Kesey. A year later, Dale Wasserman adapted a stage version, now in performance at Little Lake Theatre. And in 1975, Nicholson took the role of Randle Patrick McMurphy. So the world's coolest con artist does not belong to Nicholson. This month, the role belongs to Nick Murosky, and Murosky truly owns it.

McMurphy is a gambler and statutory rapist who claims insanity, but when he ends up in a mental ward, he starts to regret dodging jail. He meets a slew of maladjusted people, from pompous pontificator Dale Harding to anxiety-addled Billy Bibbit. McMurphy is fun and feisty, but finds a nemesis in Nurse Ratched, the hospital's calmly fascist caretaker. Ratched and McMurphy play a vicious chess game, of human spirit versus regulation, misogynistic machismo versus stoic mothering, until everything falls apart.

This Cuckoo's Nest is the best show I've ever seen at Little Lake, not only because of the rambunctious script, but because the characterizations are so novel. Murosky is not Nicholson. He's younger, blonder and more gregarious. Nicholson could never hide his razor edge, and you'd believe he once beat up a hooker. Murosky looks like a folksy frat boy who just likes a good time. His movement around the stage is almost gymnastic. When Murosky plays indignant, you root for him.

Nor does Joanna Lowe play Nurse Ratched like Louise Fletcher. Where Fletcher was robotically cold, Lowe shows maternal moments, like an ice cube that's trying to stop itself from melting.

Wasserman's play is very different from the movie. Director Art DeConciliis adds nuance and technical gimmicks that will surprise the most die-hard Kesey fans. Even the final act diverges from the film. The real triumph is a scene between McMurphy and Chief Bromden, the "mute Indian" who binds the story together. The scene is whispered, in the dark, without props or set pieces. Marcus Muzopappa plays Bromden with appropriate heartbreak. Murosky plays McMurphy with empathy and sweetness, something the great Nicholson never tried.