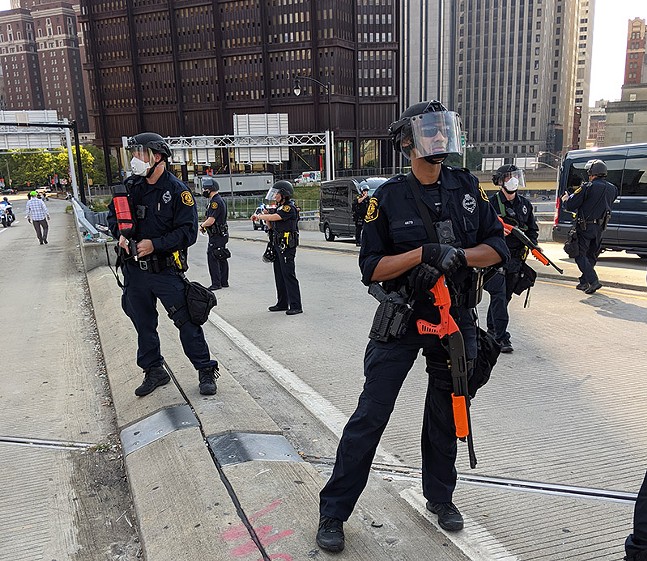 Photo shared with City Paper by anonymous source on scene of today's protest
Pittsburgh police at Project Matters' Black Lives Matter protest on Fri., July 3, 2020
Today, protesters held a demonstration that started in Freedom Corner in the Hill District and eventually marched down Centre Avenue towards Downtown Pittsburgh. Eventually, one person was arrested by police when they were kneeling in front of officers during a somewhat chaotic scene where traffic and marchers were intermingling at an intersection near the I-579 on-ramp.

According to KDKA, there were about 100 people who marched. The march was organized by Project Matters, and was billed as a Black LGBTQIA Liberation March.

While Pittsburgh City Paper wasn't on the scene, a protester spoke to City Paper about the events on the condition of anonymity, and CP watched several videos of the protest online. This protester stayed the duration of the action and said that organizers were very intentional about social distancing and mask wearing, telling marchers to remain six feet from each other at all times, and to wear masks at all times, except when taking a drink of water.

Yesterday, Allegheny County Executive Rich Fitzgerald issued an order barring gatherings events of 25 or more people, due to the county's spike in coronavirus cases. Yesterday the county saw 233 cases, a single day record, and today saw 177 cases of COVID-19. Fitzgerald spokesperson Amie Downs confirms that protests are included in the order if they include gatherings of over 25 people. However, she said the county respects people's first amendment rights to protest, but reminds everyone that the county does have a volunteer stay-at-home order in place and asks people to consider their community members when making decisions on whether to attend.

Eventually, the marchers became intermingled with traffic at the corner of Centre Avenue and Washington Place, which led to protesters stopping in the streets. According to the protester who spoke to CP, marchers stopped at this intersection because they were worried that traffic would be allowed to drive through the march and endanger protesters. The march only traveled about three blocks before protesters stopped due to the confrontation with traffic.


“The police were not blocking traffic effectively, and cars were getting through to our safety marshals,” said the protester.

The police line slowly approached the marchers as they shouted, “This is not a riot," according to videos of the account. According to KDKA, the police told protesters to disperse as they declared an unlawful assembly. According to the protester who spoke to CP, the police did not mention the county’s order of no gatherings of 25 or more people.

After another few minutes, one protester then got on their knees. At about the 10 minute and 40 second mark in the video below, officers can be seen cuffing the protester on their knees, and then bringing them to the ground.
KDKA reported the march was peaceful, and there was no violence.

In a statement sent to KDKA, Pittsburgh Public Safety officials confirmed the demonstration was peaceful and claimed that protesters “blocked vehicle access to the 579 on-ramp creating a traffic and safety hazard. At that point an unlawful assembly was declared.”

Public safety officials said there was one arrest for “failure to disperse and obstruction of roadways.”

According to social media videos, marchers arrived at the corner of Centre and Washington and expressed confusion. Marchers in videos are exclaiming, “Look at all these cars, they are just letting them through,” and are yelling at police, who at the time were stationed more than a block away, asking them, “Come do your job so they can't follow us up the hill?"

“They are literally letting traffic come in as we are marching,” said a marcher talking in the video.


The protester says the marchers decided to temporarily occupy that intersection as a way to ensure that other marchers would not have to interact with cars as they were marching down Center Avenue. Protesters had only marched about three blocks before stopping in the intersection, concerned about the cars intermingling with the march.

At the 1 minute and 20 second mark of the video below, a marcher says, “Look at this, we literally can’t let the crowd move, there is nothing we can do because they are going to keep coming behind us.”
About 3 minutes later, an officer dressed in a typical police uniform arrived on motorcycle to help direct traffic out of the way of protesters. Some cars were moved through. Eventually, it appears from the videos that protesters did close off the intersection of Centre and Washington. But marchers in the video say this was because police were not helping to clear traffic from confronting the marchers.

Eventually, the officer left the scene. Then more private vehicles arrived coming up Centre Avenue from Downtown. After another few minutes, more vehicles drove up to the marchers from other sides of the intersection, with some cars intermingling with the protesters.

The protester who spoke to CP said at this point, there were about 30 protesters, as others had left the scene. What appears to be about 5 minutes after the motorcycle is when riot-clad officers start to arrive on the scene, and when one person was eventually arrested.

This wasn’t the first time Pittsburgh Police arrested Black Lives Matter protesters. On May 30, police arrested 43 adults after a large protest. That protest included some property damage of vacant police vehicles and some looting in Downtown Pittsburgh, though it appears only a small fraction of those arrested had anything to do with property damage and looting. And on June 1, a group of about 100 BLM marchers were met by police in riot gear who fired tear gas and sponge rounds at protesters in East Liberty. Over 90% of those arrested on May 30 and June 1 had all of their charges dropped. The city is being sued over police actions that occurred on June 1.

Today, after the kneeling person was arrested, the protester who spoke to CP said many in the crowd started to disperse. According to KDKA, protesters started to walk away after a “third and final” warning to disperse and by 6:30 p.m., all had dispersed.

Overall, the protester who spoke to CP said he believes the police handled the situation poorly. He notes that Pittsburgh officials have already announced they will be escorting a boat parade happening tomorrow that is celebrating President Donald Trump. He wonders why today’s Blacks Lives Matters protesters weren’t afforded the same treatment.

“I think the police need to protect the first amendment rights of all protesters, and it doesn't feel like the BLM protesters were respected,” he said.