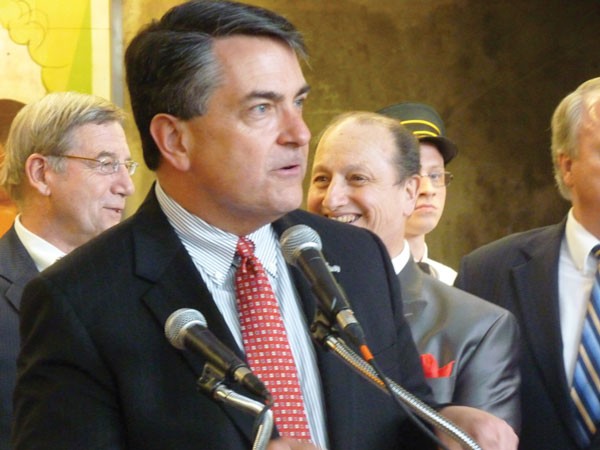 Between a public hearing where nearly 360 people testified about proposed transit service cuts, discussions with Gov. Tom Corbett and the launch of the North Shore Connector, the Port Authority of Allegheny County has been in the headlines a lot lately. And that often puts authority CEO Steve Bland in the hot seat. The leader of the oft-criticized transit agency took time March 23 to talk about some of the issues facing the agency.

Based on what you heard from the governor in your meeting with him March 16, is there any reason to think the state will take action to help you avert the proposed September cuts?

I'm cautiously optimistic that we'll have a solution, and that's going to have to include action by the Port Authority, action by the union, the county and the state.

So is it safe to say that the cuts won't happen?

I'm optimistic [a solution] can happen. There's an awful lot of moving pieces.

Is there anything the Port Authority plans to do as suggested by the Governor?

What is the status of negotiations with Amalgamated Transit Union Local 85, whose contract expires at the end of June?

[There has been] a lot of [information exchange] — I think it's productive. Is there any "news"? No. But they're complicated issues, so it's very reasonable for them to ask for a lot of information.

Based on everything going on with the Port Authority's funding situation and a $64 million deficit, how does the North Shore Connector launch factor into the fabric of the agency?

The biggest issue, even beyond the Port Authority, is what it does for the region. It extends the boundaries of Downtown Pittsburgh, one of the most vibrant spots in the region. It fosters a lot more growth.

Can you talk about how this project was funded and the criticisms around that funding?

The project is 80 percent funded with government funds. A lot of people have the false impression that if we didn't use the money for this we could use it for something else. If we didn't use the money for the North Shore Connector, those funds would have gone to Salt Lake City or Denver. So it's a huge infusion of funding for the region that supported 3,000 construction jobs ... frankly at a time when the economy here was in trouble. It was a tremendous benefit to the region.

This project was in the works since 1996; where does the authority go from here in terms of capital projects?

A lot of the planning we're doing is around overall system enhancement. ... The North Shore [Connector] isn't the only service change, but it essentially completes the implementation of the Transit Development Plan. So we're looking at taking better advantage of the service design, studying on-street Bus Rapid Transit between Oakland and Downtown. We'll be working with the city, county and other stakeholders on rationalizing Downtown bus circulation. Obviously we have to see how the North Shore Connector — officially T-Plus — how we can continue to make that the real regional asset. ... It's really, I think, up to the region from here on out [to decide] how do we best take advantage.

Now that this is running, is there any risk its service could be cut or reduced as a result of the proposed 35 percent service reduction in September?

No, not really, not directly. Obviously, September would be a horrible month. ... If the cuts go through in September, we'd expect rail ridership to go through the roof.