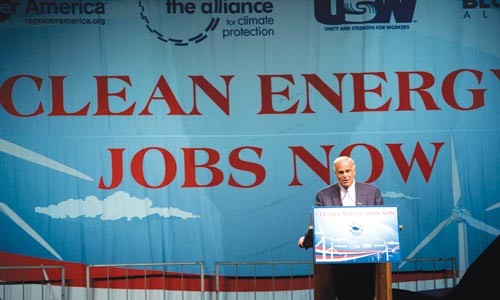 Climate change was to have been a major theme at the G-20 summit. And it was -- just not among the world leaders.

The sense of urgency seemed highest at the August Wilson Center for African American Culture. A block from the Convention Center where delegates met, humanitarian and environmental groups led by the U.S. Climate Action Network hosted a media center.

The groups hoped leaders here would address key issues before December's big United Nations meeting in Copenhagen. Copenhagen is seen as make-or-break for efforts to reduce emissions of greenhouse gases. Quick action could avoid the worst effects of climate change, including drought and flooding as well as mass extinctions of plant and animal species.

The nonprofits' main message was that cutting greenhouse-gas emissions is cheaper than you'd think -- and that inaction will be much costlier.

"That money needs to be identified before we get to Copenhagen," Greenpeace's Steve Herz told reporters.

But that didn't happen in Pittsburgh. Nor did much of anything on climate. It was "a disappointing outcome," said David Wasco, Oxfam America's climate-change program director.

Those who hit the streets, meanwhile, stayed on message. Greenpeace, for example, got pre-summit headlines by adorning the West End Bridge with a huge banner reading "Danger: Climate Destruction Ahead. Reduce CO2 Emissions Now."

Elsewhere, a Sept. 23 clean-energy jobs rally drew 2,600 to Point State Park, where groups like the Sierra Club and the United Steelworkers union contended that building windmills and such can revitalize American manufacturing. They thus echoed the representatives of business and government who were also at the Wilson Center, touting green jobs. Like Obama, all of them linked greenness to economic growth.

But there was a shadow behind such hopeful events -- and behind the G-20 summit's closing statement that poor people's problem is merely being "insufficiently integrated into the global economy." It's unclear how expanding the global economy would help the planet. Even without climate change, economic "growth" has become synonymous with razed forests, fished-out oceans, and poisoned rivers.

Another question involves our attention span for long-range problems like climate change. The summit's lone real business day, Friday, was dominated by talk about Iran's nuclear program. (CNN opined that the summit was "sleepy" until Iran came up.)

In his closing remarks, Obama did mention plans to phase out $300 billion in global subsidies for fossil fuels. Then, in response to a question about protests here, the president lightly belittled turnout, comparing it to the "hundreds of thousands" in London, and affirmed his faith in capitalism.

When Obama began speaking, Oxfam's Wasco had been calling the summit a disappointment for environmentalists. And in fact, during his remarks, Obama took four other questions: All were about Iran.