On the North Side, Huszar offers classic Hungarian comfort food

A friendly place to enjoy meat, potatoes, soups and goulash 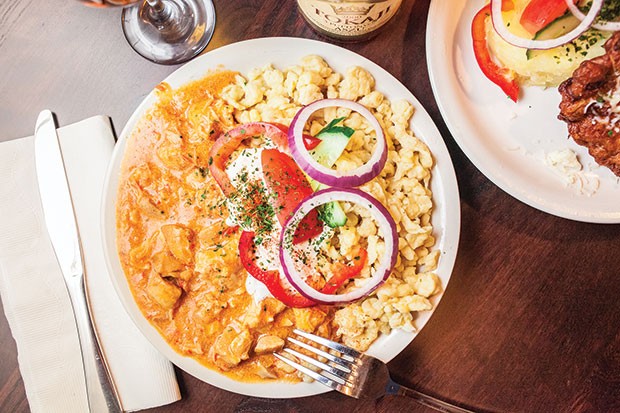 One of the lasting legacies of Pittsburgh’s immigrant-driven, industrial past is its ties — sometimes generations removed, but still tenuously present — to the Old World of Central Europe. Recently, a revival of interest in old-fashioned regional cuisines has provided new opportunities to explore and strengthen this legacy through food. And so, on the North Side, in a nearly windowless tavern perched between Allegheny Hospital and the Parkway North, Judy Torma has converted her father’s Recovery Room into Huszar, a tribute to her Hungarian heritage.

A tribute can exaggerate or glorify the memory of the past; not so at Huszar. As befits the refreshingly unaffected surroundings and the humble heroics of the immigrant experience, Huszar presents everyday Hungarian cooking as brought to Pittsburgh by Torma’s parents in the wake of the failed 1956 revolution. Unreconstructed, unabstracted and untouched by post-modern global impulses such as kimchi or black garlic, this is food we imagine would be comfortingly familiar to countless Pittsburghers past.

It certainly draws a strong crowd among Pittsburghers present. We wanted to go on one of the nights that the Gipsy Stringz play their biweekly engagement, and ended up waiting almost two months for a reservation.

It was worth it. The music, occasionally augmented by patrons joining in their own Eastern European tongues, was lively and joyful, the crowd convivial, and the service friendly and warm. The food was terrific as well. Huszar originally opened with a limited menu, but in December brought over a Hungarian chef who filled out the menu with options beyond paprikás and gulyás (a.k.a. goulash).

An easy choice for a starter was hortobagyi palacsinta (easy to choose, not necessarily to pronounce; there’s no shame in pointing to what you want on this all-Hungarian menu). A tender crepe enveloped shredded chicken and was topped with farmer’s cheese and paprikás sauce. Like the most enduring examples of peasant food, this is a dish designed to stretch last night’s leftovers while offering a change of pace, but it was savory and satisfying in its own right.

We of course tried gulyás. Described as a stew but listed under soups, it seemed more like the latter, with a brothy medium for the traditional simmered beef, potatoes, carrots and onions. While we prefer a stewier version, ourselves, one that can be swirled with sour cream and sopped up with noodles or dumplings, we appreciated this (relatively) lighter recipe. It offered a hearty melding of beef, paprika and root-vegetable flavors, but didn’t fill us up so much that we were unable to sample the rest of the menu. We also tried and liked the creamed onion soup: Shredded cheese melted into the bisque-like broth, making it even creamier, but never obscuring the true onion flavor.

Cucumber and red-cabbage salads were little side dishes of very different character. The former was almost like a soup on a plate, with ultra-thin slices of cuke in a sour-creamy dressing. In the latter, hearty shreds of cabbage were flavored, but not softened, by their dressing. Our entire party liked the cucumbers so much we ordered several plates, but the káposzta is for cabbage fans only.

Marhapörkölt was a pretty straightforward beef stew highlighted by superb nokedli, a style of dumpling seemingly identical to spätzle. The nokedli were a highlight of Huszar’s excellent chicken paprikás, as well: a generous heaping of white-meat chicken chunks stewed in a sour-cream paprika sauce, accented with sweetly astringent sliced tomatoes, slivers of zingy red onion and fresh leaves of parsley.

Steak lecsos augmented an ordinary sirloin with a marvelously flavorful sauce — more like a relish — of peppers, onions and tomatoes. Ingredients aside, you’d never mistake this for that accompaniment to sautéed Italian sausage, and it matched up well with the fried potatoes, which were large, golden chunks that soaked up adjoining flavors.

The potatoes stood more on their own in Jason’s dish, Gypsy-style pork loin with bacon. The pork was not too dry — a challenge with loin — and the bacon was amazing: a thick, meaty slice that at first resembled Asian pork belly, but revealed extraordinary depth of smokiness with a character distinct from American bacon, intense yet neither harsh nor sweet.

A standout from the dessert menu was gundel palacsinta, a crepe filled with apricot jam and ground walnuts, then topped with a dark, not too thick, chocolate sauce. It was rich without being heavy, and the range of textures was pleasing.

Huszar’s food, both familiar and new to us, was consistently good, and along with its casual, friendly atmosphere, made us happy to feel Hungarian for a night.