On the heels of his sixth studio album, Kurt Vile is starting to feel famous … sort of | Music | Pittsburgh | Pittsburgh City Paper

On the heels of his sixth studio album, Kurt Vile is starting to feel famous … sort of

“Actual real hits on the radio! That would be cool.”

KURT VILE AND THE VIOLATORS with XYLOURIS WHITE

Kurt Vile has been off the grid.

He speaks by phone from Coles Bay, Tasmania, where he, his wife and two kids are “just chillin’ out” after a few days in the rainforest. They’re not ready to fly back to Philly yet, so they keep pushing back the flight.

He and his band, the Violators, have just wrapped up the Australia and New Zealand leg of their tour in support of Vile’s new album, b’lieve i’m goin down... It’s his most successful album to date, widely praised even though it didn’t necessarily tear up the charts. (It peaked at No. 40 on the Billboard chart.)

Asked about the album, Vile starts and stops before settling upon exactly what he wants to say:

“I think, in my head, I thought it would blow up in a similar way that friends of mine’s —” 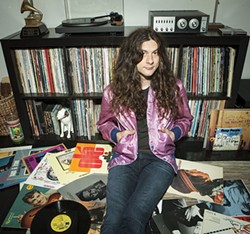 “I’m always gonna have my own sort of rhythm,” he says. “It’s like, the record did well right away. They’re always sort of a grower, though.”

Even if the album didn’t catch fire commercially, the lead single, “Pretty Pimpin’,” provided Vile with his first crossover hit.

“Weird people like middle-aged stewardesses will sometimes ask who I am,” he laughs, “and they’re like, ‘Yeah, that song, “Pretty Pimpin.’” It just makes me laugh how a song can become sort of a commercial-radio constant.”

The track is a stomper. From the down-home acoustic pluck to the ambling electric-guitar work to the self-reflective lyrics, it nicely encompasses most of Vile’s idiosyncrasies to date.

“I like the idea of having a real hit,” he says. “Maybe I’ll just start making that my goal. Actual real hits on the radio! That would be cool.”

Vile says time off from the road like this is “the best time in the world” for him to think about music. Even though he’s on tour through the summer, he hopes to book studio time to lay down some tracks while they’re still fresh in his mind.

“I think [the next album] is going to be a continuation of like, this honest American thing,” says Vile, who also mentions he still has a bunch of songs left over from the b’lieve sessions.

Asked if he feels like a bona fide rock star now — “Kurt Vile” was an answer on Jeopardy! last week — Vile says the definition of  “rock star” has changed in the Internet age, and that it’s not like he’s Neil Young, age 24, with a ranch and a bunch of hangers-on.

“It just means that people listen to my music, and at my gigs, they might see me go into the door and ask me for my autograph. I’ve come to terms with that. It just, it makes me feel good about my job, like I should keep doing it, you know?”