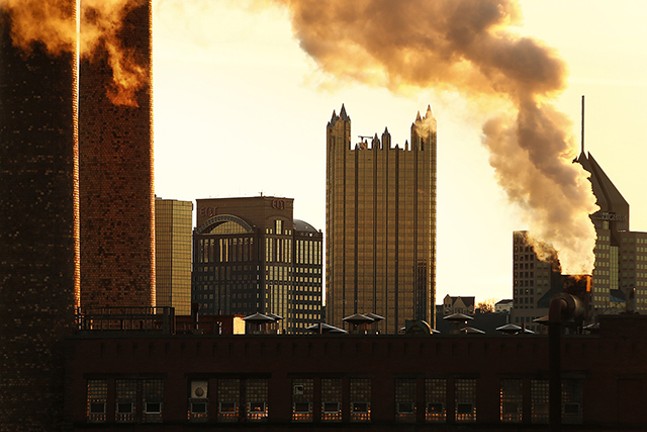 Philip Johnson became a household name, or at least a corporate office name, in Pittsburgh for PPG Place, which opened in 1983. The architect had an innate sense for the story that Pittsburgh wanted to tell about itself, not recession and deindustrialization, but a shimmering and theatrical renewal. On closer examination, the complex can seem heavy handed and aloof. Still, amid a generation of office towers of Pittsburgh’s Renaissance II, PPG is still the widely admired scene-stealer.

Johnson himself presents a more complex case. While he influenced many of the major developments in twentieth century American architecture as curator at the Museum of Modern Art or in his own private practice, he could be glib and capricious in person and in architecture.

A new biography by Mark Lamster, the architecture critic of the Dallas Morning News, brings renewed insight to a paradoxically omnipresent and newly shocking figure.

Born to wealthy parents in Cleveland in 1906, Philip Johnson became a troubled and unremarkable student at Harvard. But his father’s work for the company that became ALCOA vaulted him from privilege to independent wealth. And his mother’s degree in Art History from Wellesley led him to contact professor Alfred Barr, future director of the Museum of Modern Art. Under Barr’s direction, he collaborated on a groundbreaking 1932 exhibition of International Style architecture, which introduced works of his hero, Mies van der Rohe, as well as Walter Gropius, J.J.P. Oud and others to American audiences, influencing American architectural culture for decades. With his uncanny skill at tastemaking initiated, he continued as Director of Architecture at MOMA, influentially, but without pay.

His entrée into architectural practice came in 1942 when his financial resources enabled him to build the Mies van der Rohe-influenced Cambridge residence that was his Harvard graduate thesis. It was only the beginning of a prolific career. Often criticized, even by Lamster, as a designer of some derivative and forgettable buildings, he is nonetheless associated with many icons. His Glass House of 1949 in Greenwich, CT, another Miesian exercise, is renowned as a center of important architectural gatherings, but it is an emblem of a style that includes better houses. On New York’s revered Seagram Building, completed in 1958, he was junior partner to Mies, though Johnson famously secured the commission.

By 1979, Johnson was ready to completely abandon Modernism and fully embrace the colorful and ironic, even cartoonish aspects of postmodernism. His AT&T Building, a pink slab, whose pitched roof is frivolously broken by an open circle, put him on magazine covers in the late 1970s. Plenty of architects were postmodernists by then, but Johnson’s conversion seemed especially cynical, a betrayal of his aesthetic principles.

Yet this realignment was nowhere near his worst betrayal. In the 1930s and through the beginning of World War II, Johnson was an actual Nazi. Regardless of his own homosexuality, he admired Hitler and published a series of anti-Semitic essays. Johnson escaped prosecution and imprisonment mostly because he was too wealthy to accept money from Hitler’s regime. Spy magazine exposed this record in the late 1980s, as did Franz Schulze’s 1994 biography, but those failed to capture the public eye the way Lamster’s book has. The Man in the Glass House is newly detailed, personal, and readable without any flinching about his subject’s Nazi past.

Johnson disavowed his Nazism during World War II. He became a promoter and friend of Jewish architects such as Robert Stern and Frank Gehry as well as clients including the Bronfman family and even the State of Israel. His great realignment from modernist to postmodernist architecture seems incidental by comparison.

Lamster’s book is already widely reviewed, often by writers who view Johnson’s Nazism as the driving theme. Other observers note that Johnson’s desire to strip the social conscience from architecture and perpetuate the field as an elitist men’s club were more pervasive and lasting offenses than his horrifying but ultimately ineffective dalliance with Hitler.

The man had a moral center as empty as the circular hole in AT&T’s pediment, as barren as PPG Plaza without the rink or the fountains, which were post-Johnson additions.

But if we can fix PPG’s elitist shortcomings, we can also make architecture’s values more diverse and inclusive than Johnson could imagine. His horrifying immorality may crowd out the story of his architecture, but it doesn’t have to have the same effect on ours.