“Most labels would have been like, ‘Are you crazy? We don’t have time for that.’”

Around a table in Bloomfield’s bright, diner-like Thai Gourmet, the members of Run Forever laugh and tease over tom yum soup. It’s a birthday dinner for drummer Tom Moran, and a reunion: Moran, who recently relocated to Philadelphia, is in town for the day for a band photo shoot. They’re also here to talk about their new record, and when frontman Anthony Heubel goes on semi-fictional tangents (“Things were different in those days,” he says of the group’s beginnings. “You could buy candy for a penny!”), his band-mates — including bassist Cassie Staub and guitarist/ pianist Jeremy Sessa — gently rein him in.

The bill comes, and fortune cookies are cracked open. A well-composed fortune can apply to anyone and, as they’re read aloud by everyone but Sessa — who hates fortune cookies — they apply just as readily to the life of a band.


“Great works are performed not by strength but by perseverance”

Run Forever was born soon after Heubel and Staub moved to Pittsburgh from Erie, in 2009. At first, it was essentially Heubel’s solo project — he’s still the primary songwriter. But, Staub says, “As the songs developed, he started adding people. I really [hadn’t] played an instrument until then.” Soon they met Moran. (“And what luck,” Heubel deadpans, “for the next three years, we almost had him in the band.”) After a few years of rotating lineups, Moran made his membership official, and recruited Sessa. “We made him get a piano, and … the rest is history,” Heubel says.

On Oct. 9, the band will release its third full-length, Run Forever, on Huntington Beach, Calif.-based label No Sleep Records (the release show is Oct. 18). And thanks to maturing tastes, musical chemistry and the support of No Sleep owner Chris Hansen, it’s easily the band’s best.

“He kind of had a crazy amount of faith in us,” says Sessa of Hansen, who was unfazed by the fact that they wanted to record most songs analog, and a longer-than-expected recording process. 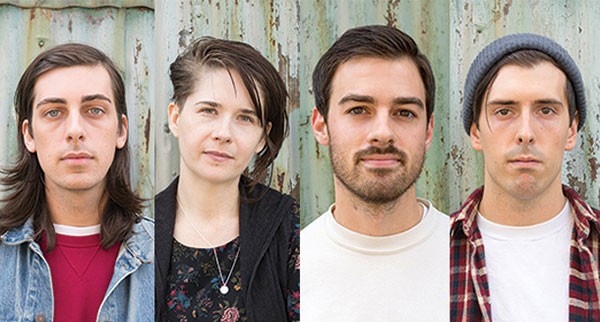 “Fear and desire are two sides of the same coin”

Run Forever’s music has always been characterized by raw emotion, but Heubel’s songwriting has sharpened, cutting to the heart of the fear/desire dichotomy. On Run Forever, big dreams are threatened by life’s grind; good relationships quietly sour, heartache masquerades unsuccessfully as indifference. Past releases have dealt in emo, folk and pop-punk, and some of that remains. But on the whole, this is solid indie rock, bringing to mind Bright Eyes (Heubel shares Conner Oberst’s vocal quiver) and Death Cab for Cutie.

“We’ve listened to the same music throughout the span of [making] Run Forever,” Heubel says, citing Oberst, A.A. Bondy and Pedro the Lion. “I think we’re … heading in a direction where what we like is lining up with what we’re playing.” Moran adds that they’ve backed off on the relative aggression of earlier output. “We got bored with it real quick,” he says. “As we were writing [Run Forever], there were 25 or 30 songs that were written that we kept cutting and cutting. The ones that worked out are more on the softer side, and it felt natural to go to that.”

Ultimately, the goal was to make something that felt right. “We wrote and argued and wrote and argued for like a year-and-a-half,” Moran says. “It sucks [having ideas] rejected, and it sucks to reject.” But, Staub adds, “It’s also awesome to have a group of friends that challenge you, that you trust to help create a clear vision.”

Thanks to attention from national music blogs — Brooklyn Vegan and Stereogum both premiered songs from the new record — the band seems primed for whatever the “next level” is in a post-major-label world. But it’s not going to anyone’s head. “It’s cool to have something to show my parents,” Moran shrugs. “I’m not sure how much it matters in the real world, when you’re on tour.”

They’re quick to acknowledge the people who have supported them from the beginning, who see the band on every tour; who, Moran says, “for some reason have our back.” But they want to do things their way, even if that means making choices that may seem counterintuitive, like turning down big tours that would promise exposure. As Heubel puts it, “We just have a very strong vision of where we want to be as a band and what we consider successful, rather than just what makes the most money and gets the most people to hear our music.”

So what does the future hold for Run Forever? Only time will tell. But one can’t help but wonder what answers were contained in Sessa’s discarded cookie fortune.