His career longevity has shown he’s not a quitter. He’s a survivor. Matthew Ryan is the boxer.

Even though he moved to Beaver County from Nashville about four years ago, singer/songwriter Matthew Ryan hasn’t really performed much around town.

“This is my first show in the city other than guesting with Gaslight Anthem at Stage AE a couple years back,” says Ryan, a native of Chester, Pa., near Philadelphia. “I can’t even express how excited I am to be playing Club Café. It’s one of the best rooms of its kind in the country.”

“It’ll be the last night of a two-week tour Jesse [Malin] and I will have done together,” he adds, “so we’ll be in top form.” 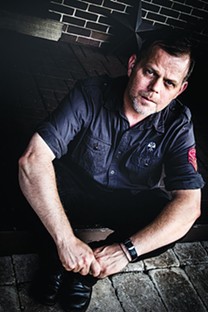 For more than two decades, Ryan has been known for his raspy vocal delivery and his poetic storytelling, usually about folks who have been beaten down by life and who possess little more than the will to survive — for those reasons, he is often compared to both Bruce Springsteen and The Replacements’ Paul Westerberg. His 11th studio album, Boxers, is a prime example of that style. It’s also a reflection of the region he now calls home.

Ryan has become, in some circles, a modern-day working-class hero: In his songs he creates a world where darkness turns into light, where ugly becomes beautiful and where one just doesn’t give in. Boxers is an album for those who have struggled in a blue-collar society. Maybe they were put out on the streets after failing to pay rent, maybe they lost a job, or maybe they’ve done things they aren’t proud of. But they never give up. These are tales of survivors, as the song “An Anthem for the Broken” amplifies in its repeated chorus “We won’t quit.”

Sure, Ryan arguably wrote these songs for those types of people — “This One’s For You Frankie,” “God’s Not Here Tonight,” as well as the title track. But it also feels like Ryan wrote these songs for himself. His career longevity has shown he’s not a quitter. He’s a survivor. Matthew Ryan is the boxer.

“Boxers was heavily influenced by the spirit of what I see, hear and feel in Western Pennsylvania,” Ryan says. “I’m currently out on the road a lot supporting Boxers and building its story.”

After he wraps up the tour with Malin, Ryan plans to get “settled in to start writing the next album,” although he says he plans on taking his time. And just as his life in Western Pa. influenced Boxers, Ryan says you’ll feel the influence on the new record as well, even if that feel is a little different from his previous work.

“The new songs have an optimism, an anthemic light to them,” he says. “They’re still gritty, but not quite as past-dwelling. I credit a lot of that to this new life I’m building, and the friendships I’m finding here in the area.”