On his first U.S. tour, an acclaimed Lebanese performance artist visits The Warhol. 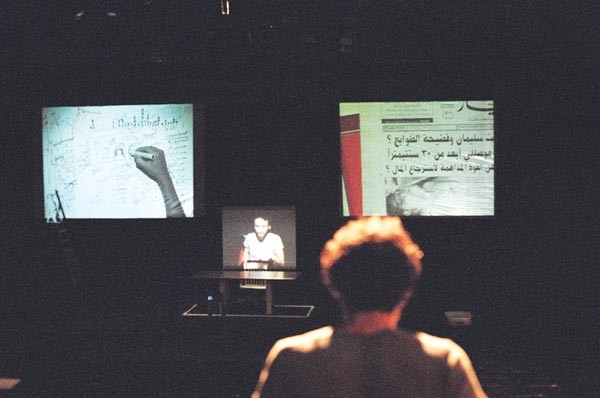 Rabih Mroue in Looking for a Missing Employee

In Looking for a Missing Employee, Lebanese performance artist Rabih Mroué himself seems to be missing — from the stage.

The 2003 work explores the case of a Ministry of Finance employee who disappeared, along with a load of cash, in 1996. Using six years of newspaper clippings, Mroué plays detective. But he tells the story while sitting in the audience, the stage occupied by only projected video including his own image and that of a map visualizing the case, as drawn live by Mroué's collaborator, cartoonist Ghassan Halawani.

"It's very tragic and it's very funny," says Mroué, speaking by phone from Vancouver of the 105-minute work that asks, "Is it possible to be here and there now, at the same time, and what does it mean to be ‘here' and ‘there' today?"

Mroué, 44, has been on the international art circuit since 2002, and in 2008 portrayed Catherine Deneuve's guide through war-torn Beirut in the film Je Veux Voir. His avant-garde, politically edged work has earned him comparisons to New York's iconic Wooster Group. At least one of his shows was banned in Lebanon.

On his first U.S. tour, on Feb. 2 and 3 Mroué visits The Andy Warhol Museum's Off the Wall series with Missing Employee and a new work, The Pixelated Revolution.

Pixelated Revolution was co-commissioned by The Warhol, one of four arts institutions that gave Mroué the 2010 Spalding Gray Award. The show, which world-premiered in New York, explores the use of mobile-phone imaging in the Arab Spring. It's built around a video clip Mroué calls "Double Shooting," in which a phone-cameraman encounters a Syrian army sniper.

"You feel there is a war against the camera," says Mroué. But he considers Pixelated Revolution neither activism nor journalism. "It's a piece that [asks] questions, and that [pushes] us to think — to think about the image, about the meaning of death, and some philosophical questions as well."

In Missing Employee, he says, "I jump in the ocean of newspapers to play the role of detective, and I got lost. [In Pixelated Revolution,] I jump into the world of the Internet and try to see what's going on, and I also got lost in a way."