“That’s how we get to know everybody. We know what they eat.” 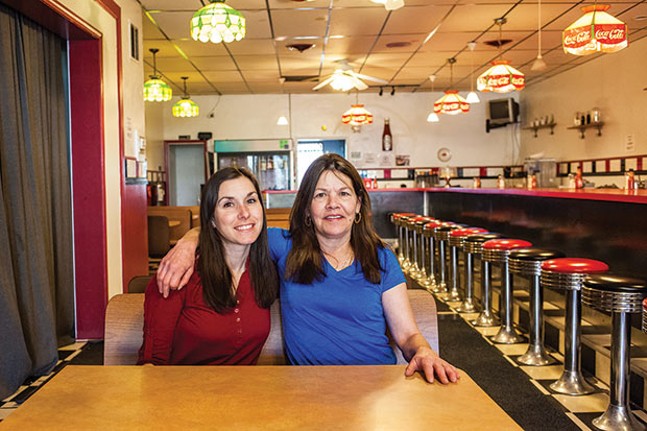 Cheryl Parsons and her daughter, Shelly Moeller, believe in family business. Parsons owns O’Leary’s Diner, in the South Side, and Moeller grew up there, doing her homework at the counter and helping out with customers. Now in her thirties, Moeller owns her own diner in Allentown called Breakfast at Shelly’s. “This is what I know how to do,” she says.

They’re the same, but different: Parsons is quiet, but quick, and has a gentle way about her, while Moeller is full of confident verve, and is business-minded. Both are mothers of four who seem to live on a diet of black coffee and determination. It’s clear that Parsons is extremely proud of her daughter’s hard work and success.

Twenty-six years ago, Parsons walked into the East Carson Street space of what would become her diner. She had learned to cook on the line at B&G Restaurant, in the Grant Building, Downtown, before Shelly was born; she held positions at Islays and a few other spots before deciding to strike out on her own.

She paid the landlord, took the “for rent” sign down and hasn’t stopped moving since. “It was called O’Leary’s then, and we just kept the name,” she says. This diner has long been a local institution, with many of her customers returning for multiple meals in a day. “It’s become like a family down there,” she says.

For Parsons, that statement isn’t just a figure of speech. Her youngest daughter is one of her employees, and her longest term customer, who comes in six days a week (well, five days at O’Leary’s and one day at Shelly’s), is the godfather of her grandchild. Parsons rattles off his usual order. “That’s how we get to know everybody. We know what they eat,” she says. Moeller tells me that some of Parsons’ customers even call her Mama.

Moeller started working at O’Leary’s at age 12. In its early years, the business was struggling to find its niche, and mother and daughter were overworked. “We used to have a big steam table with homemade mashed potatoes and green beans. We used to be in there at 5 or 6 o’clock in the morning, rolling stuffed cabbages,” Moeller says. In the process, she and Parsons got hooked on Starbucks coffee. “I said, ‘There’s a drug in here!’” Parsons says, laughing.

When Moeller came of age, she got a job working nights at Mario’s and would send her customers to O’Leary’s during the day. In later years, she also worked overnights at Tom’s Diner for 10 years. “She’s always worked,” says Parsons, glancing affectionately at her daughter.

Two years ago, Moeller decided she was ready to strike out on her own and opened Breakfast at Shelly’s, on East Warrington Avenue. “I was ready to figure out what I wanted to do with my life and make a name for myself,” she says.

The menu offers hearty fare like O’Leary’s, but with a modern twist, especially for her lunches. All of the fries are freshly cut, and the sausage is hand-ground by Black Market, the deli that occupies the front of her business. Little extras like salsa and cheese sauce are available. Business has steadily increased, and she’s set on keeping that trend going. “We haven’t lost money since we opened. I’m really proud of this place. The weekends are doing better than they were,” she says, detailing her star ratings on Yelp, Facebook and Grubhub. “I’m proud to be up here [in Allentown].”

Parsons considers herself blessed in her family and her business. She tries to give back to her community. “I get a lot of homeless [people at O’Leary’s]. I don’t know how they find me. They come in, and they’re hungry, or they bring their dogs in. I take dog food down to them. My other daughter gets mad, and my sister [does too], and I’m like, ‘I feel better feeding them. I wouldn’t want my kids being hungry,’” she says.

Moeller worries about her mom being taken advantage of: “She has a good heart,” she says. When Parsons says she plans to celebrate the restaurant’s 30th anniversary this year with a day of 30-cent menu items, Moeller sighs. “I’m always worried about her making money. I want her to be successful,” she says.

Although their business styles are different and they’ve butted heads over the years, they’ve been able to help each other get to where they are now. Moeller learned the tricks of the trade from her mom, and Parsons has benefitted from Moeller’s business mind and work ethic; the two talk on the phone every day, comparing prices, venting about stresses and exchanging advice. Even throughout our conversation, they finish each other’s sentences, back each other up and constantly acknowledge the other’s hard work and determination.