Old photos, an old dance and ancient artifacts are repurposed in Reanimation.

Three short, silent films inhabit the Carnegie Museum of Art's Forum Gallery for Forum 65: Jones, Koester, Nashashibi/Skaer: Reanimation. The works are projected in various sizes, and the arrangement, almost intentionally awkward, forces viewers to slow down their apprehension of the material, and take in each piece in turn.

Two of the three are moderately intriguing, though mainly because of their subject matter. The hole-punched images in William E. Jones' "Punctured" were lifted from a colossal reservoir of photographs rejected by the Farm Security Administration, which documented and published everyday scenes of life during the Great Depression.

Despite the vastness of the source, the order and selection of photos seems practically arbitrary. The curatorial glossing suggests an effort to illustrate the unavoidable fictionalization of history through inclusion versus omission, a la Susan Sontag and other theorists of photography. The Janus face of documentation isn't made especially plain, however, leaving the viewer -- in spite of the austere material -- almost feeling like he's just taking the perfunctory look at a friend's vacation pictures.

"Flash in the Metropolitan," by Rosalind Nashashibi and Lucy Skaer, bases the search for new forms in a location devoted to preserving some of the oldest ones known, New York's Metropolitan Museum of Art. The dichotomy has impact, periodically. At such times, the film's constantly pulsing strobe light illuminates an object's contours so that a modest shape becomes fleetingly beautiful or terrible.

Even so, there is too high a concentration on stylized medieval busts of kings and saints for the focus on human heads to be an accident. Beyond that, such choices as a raven silhouetted by the strobe come off a little hackneyed. Ultimately, though, "Flash" does evoke something in its breaking up of the expectations of orderliness and consistency one associates with museums like the Met.

Among the Forum 65 works, the standout is Danish artist Joachim Koester's "Tarantism." In an odd micro-curatorial touch, the projector for the film is situated so close to the projection surface (the wall) that it's impossible to view it straight-on, so it's the last of the works to become visible. Perhaps deliberately, this also makes for a necessary intimacy with the film's human subjects.

Koester has a history of disinterring obscure cultural phenomena, familiarizing the seemingly alien to get viewers in synch with the abnormal. In this case his divining has struck on the Tarantella, the "dancing cure" that evolved in medieval Italy as a remedy for the bite of the wolf spider. In the short 16-mm film, several different camera angles and pans capture the frantic convulsions of dancers performing the mock cure. (To my knowledge, no spider bites were induced, though their stone-faced fervor is convincing.)

The film is as simple as it is brief, but the sense of watching a physical performance mingles with a nagging voyeuristic guilt. As one man began writhing and twitching on the ground, his pelvis achieving improbable range, I felt like more of a rubbernecker than a museum patron. The dancers are compromised in their ecstatic chaos, but contrarily unified in their proximity to one another and in the communal balance their wildness attains. Together, they resemble aboriginals in ceremony, or the snake-handling Baptists of the southern Appalachians. Their dancing cure is not for an individual malady, but for something endemic that must be overcome in union.

The subject matter of each of these films is, on the surface, fairly straightforward: ancient sculptures and artifacts; Depression-era documentary photography; and a spastic dance with historical anchorage. As always with this sort of work, the simplicity begs the question of how effective such recontextualizations are, and what they're intended to elicit in the new context. 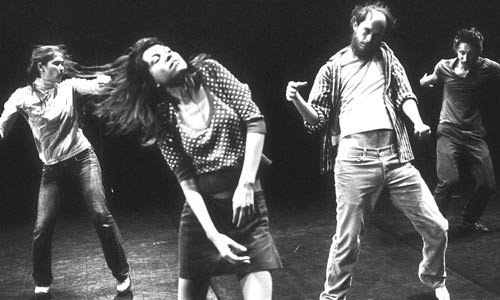 Image courtesy of the artist and Greene Naftali, New York.
Dancing for the cure: from "Tarantism," by Joachim Koester