Old is the new new at the Carnegie's Hall of Architecture turns 100. 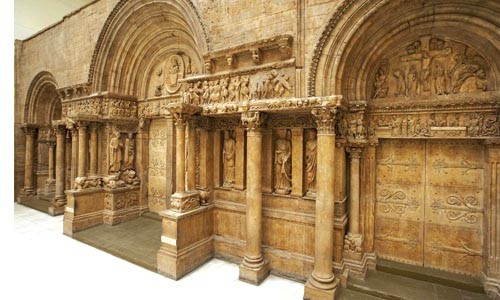 Mass appeal: Cast of the West Portal of the Abey Church of St. Gilles, Gard, France, in the Carnegie's Hall of Architecture. Photograph courtesy of Tom Little.
The least compelling part of studying history is dressing up in a bonnet and wishing that you were back in historic, 18th-century Quaintsville. To the dull, the past is a repository of steady conditions and values that helps anchor us amidst the constant and radical changes of the nuclear/space/Internet/post-industrial age.

Really though, I think that it's the present that remains largely the same. If the military quagmire overseas doesn't convince you, then maybe the upcoming beleaguered Clinton presidency and blockbuster Led Zeppelin tour will. The present is just like it always was. It's the past that keeps changing.

In 1907, when the Hall opened, having a grand exhibition room filled with replica fragments of the Western world's great architecture was the way to learn about the beautiful necessities of the art. Architecture students at the École des Beaux-Arts, in Paris, at the height of its influence in the United States, used plaster casts (and actual fragments) as learning tools. Chicago's epoch-making Columbian Exposition of 1893 displayed a huge collection of casts (in a neoclassical building that was itself sheathed in plaster). Museums around the world, not least the Metropolitan Museum of Art, in New York, collected and displayed architecture in this manner.

Andrew Carnegie was up-to-date in assembling the Carnegie's collection, and slightly democratic in bringing works of genius to the masses for whom the Grand Tour meant taking the streetcar from Bloomfield to Oakland.

But a funny thing happened on the way from the forum. Roman and other varieties of ancient works fell out of favor as European Modernism and Machine Age architecture grew in influence. Plaster, which is basically instant temporary stone, seemed less useful in the age of steel and glass, especially when the industrialization of architecture (or at least the idea of it) meant that carved stone ornament, after millennia of use, was forbidden. Most museums with architectural cast collections sold or even trashed them as the modern era "advanced."

Now, though, it's a postmodern, hyper-real age. We may continue to be interested in architecture as actual construction, but the methods of representing buildings and recombining their many images are at least as fascinating as the reality of stacking bricks on top of each other trying to keep the rain out.

Suddenly, the Hall of Architecture has renewed fascination (unless you were fascinated by it all along). Like any process of copying, the goal of replication belies a process in which the techniques are elaborate and nearly as artful as construction of the original works. The Hall's cast of the façade of the medieval church St. Gilles du Gard, the largest surviving architectural cast in the world, has a monolithic appearance that conceals its complex assembly from 200 shipping crates full of pieces.

Likewise, why St. Gilles? The beautiful structure was a favorite of Henry Hobson Richardson and many of his influential followers, such as Alden & Harlow, architects of the Carnegie Museum's 1907 expansion. If the French church isn't as widely embraced among current architectural historians and books, then that is simply another reminder that the past has changed again.

On a Grand Scale, assembled by curator Mattie Schloetzer, reveals the delicate and complex process of casting through correspondence, photographs and a few surviving molds. This exhibit's exploration of how casts were selected for and used in schools, museums and publications gives a nuanced portrait of one era's priorities for material, craft and detail in communicating architectural values. That later generations dismissed these artifacts as "merely copies" seems especially wrongheaded in retrospect.

That unjust neglect is probably why New York City's Institute of Classical Architecture, founded in 1991, has assembled a collection of plaster casts "as a tool of pedagogy and direct inspiration" for students in the visual arts. Wait a minute -- an organization in New York is jumping on the bandwagon of what has been happening in Pittsburgh all along?

Gosh, that does seem new.