The nearly three hours fly by faster than a tumbleweed in a dust storm. 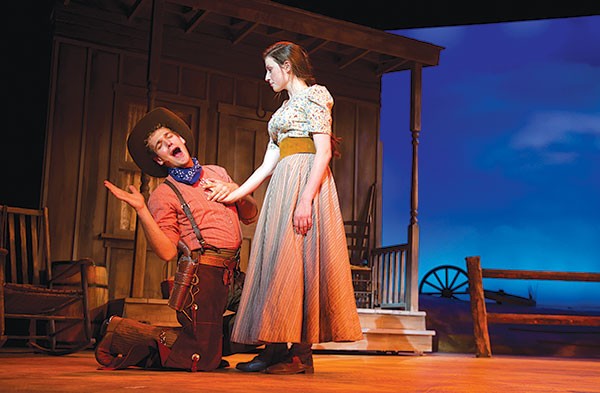 OK. So Oklahoma! has been revived at least 3,578 times this past year.

Rodgers and Hammerstein's first collaboration was a smash hit when it debuted on Broadway, in 1943, and the musical, arguably their finest, continues to make some enchanted evening.

Now we have Point Park University Conservatory Theatre Company's ambitious production, which bumps the revival number to 3,579 while bumping up the quality of what some people insist on calling "college theater."

This show may be crammed with students of various ages and backgrounds, but director Patrick Cassidy has banded them together to create a significant production as solid as an Okie twang, and the nearly three hours fly by faster than a tumbleweed in a dust storm.

Cassidy has added a few interesting touches. While the overture plays, still images and movie footage of the daze before Oklahoma became a state are screened on the set's silo and wooden house. We see sweethearts, cattle stampedes, plowing, even then-President Teddy Roosevelt. It's a fresh, if somewhat fuzzy, move. And the color-blind casting of Persian peddler Ali Akim, the show's comic relief, with African-American actor Ryan Gregory Thurman works without any hesitation.

Only weak voices can really screw up Hammerstein's lyrics, and that's not a problem here. Yes, as Ado Annie, Jorie Ann Kosel sings like the offspring of Olive Oyl and Bernadette Peters, but she's delightful to watch.

As obstinate lovebirds Laurey and Curly, Kirsten Hoover and Stanley Graham work well together, and Amanda Hawkins weaves an Aunt Eller with a sentimental, semi-sweet thread.

Then there's Luke Halferty. Literally towering above his fellow cast members, with a Karloff gaze and a relentless restlessness, his performance is as mesmerizing as it is menacing. Watch Halferty carefully in the picnic-hamper auction scene; watch the quiver, the angst smoldering just under his calloused skin. This is a Jud who's a monster menacing as a man. You can almost smell the pig slop and blood on his hands, and his participation in the Dance Ballet will send shivers down your spine.