Off the Wall's Without Ruth

The linear, TV-episode feel of the second narrative inhabits a different universe than the more theatrical, theatrically savvy main story 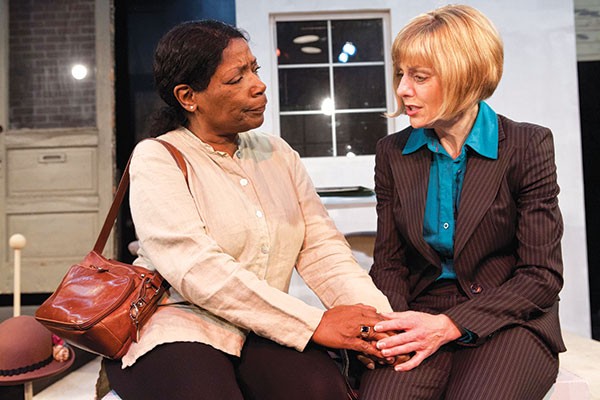 Photo by Heather Mull
Linda Haston (left) and Adrienne Wehr in Without Ruth, at Off the Wall Productions

If nothing else, you certainly get your money's worth with Off the Wall Productions' premiere of Virginia Wall Gruenert's Without Ruth.

It might be only 90 minutes long, but Gruenert has packed that hour-and-a-half with not one, but two different plays. The focus is on the character of Linda, a Pittsburgh actress, and her mother, Ruth, a woman of incredible spirit suffering the ravages of dementia. Coincidentally enough, Linda is played by Pittsburgh actress Linda Haston ... who also plays Ruth in monologues detailing her backstory and relationship with her daughter. These monologues, in fact, take up the bulk of the evening and prove to be the spine of Gruenert's story.

The other play inside this play concerns Norah, a social-service worker who helps Linda navigate the health-care system. Norah, as it happens, also has a seriously ill elderly mother, and the stress of listening to other people's problems while working through her own is a burden she shares only with a childhood friend, Abby.

This second play, if perhaps a bit Lifetime Channel-ish, is a tidy, polished little drama, well written by Gruenert and featuring detailed and moving performances by Adrienne Wehr, as Norah, and Diana Ifft, as Abby. But there isn't a moment it's not getting in the way of the first play.

To be clear: This is not a question of differing quality. But the very linear, TV-episode feel of the Norah play inhabits a different universe than the more theatrical, theatrically savvy and intensely personal Linda/Ruth story.

Director F.J. Hartland certainly knows how to get strong performances from his actresses; he and Haston make Ruth a wonderfully full-bodied character. But Hartland's blocking seems a bit off, and I'm not sure what's up with the onstage musician who occasionally, but not consistently or logically, breaks into a number.

I think somewhere down the developmental road, Gruenert — a very smart writer — is going to realize that Without Ruth is really just Ruth's story, and she'll ruthlessly (sorry) get rid of everything standing between the character and the audience. It's really what this play wants to be.