Off the Wall's Or,

Though it's got absolutely nothing to do with the holiday season, my Christmas present arrived a bit early with Off the Wall Production's staging of Liz Duffy Adams' 2010 comedy Or,, one of the most charming plays I've had the pleasure of seeing in quite some time.

This intermissionless, 90-minute play is a fantasia on the life and the passion of Aphra Behn, perhaps the first woman ever to earn her living as a playwright.

Details of her life are mostly lost. We do know she was a dramatist and a spy working for King Charles II. Everything else has been the subject of scholarly debate.

Adams takes the fact that the facts are sketchy and creates a farce in which Behn is trying to finish her latest play while intrigues are happening all around her. King Charles, her patron and would-be lover, stops by wanting Behn to put across, both sexually and politically; an old flame turns up demanding sexual and political favors; and the most famous actress of the Restoration stage, Nell Gwynne, pops in needing sexual and romantic engagement. 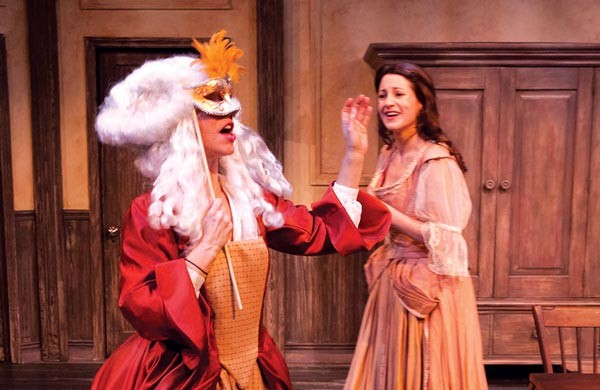 Photo courtesy of Heather Mull
Robin Abramson (left) and Erika Cuenca in Off the Wall's Or,

Though the Pittsburgh-premiere production, as directed by John Shepard, couldn't be more lucid or compelling, I have to admit I found the earlier parts a little too twee; outside of academic circles, there are probably three people who know who Behn was and, at the beginning, Or, is fairly insider-y and fairly proud of its own preciousness.

But as the show goes on, Adams leaves behind the specifics of her tale and the play becomes a deeply engrossing story of a woman (any woman) struggling to find her voice in the world and her purpose in her universe — the greatest obstacle to which is her own self-doubt.

Erika Cuenca gives an impressive and moving turn as she works through Behn's journey. Robin Abramson is having the time of her life as several characters; she's especially captivating as Gwynne. Ethan Hova's performance as both the prince and the knave is detailed and deeply felt.

While being a "theater person" might help you get some of Or,'s more esoteric jokes, this Off the Wall production proves to be for everyone.