Off the Wall's A Feminine Ending 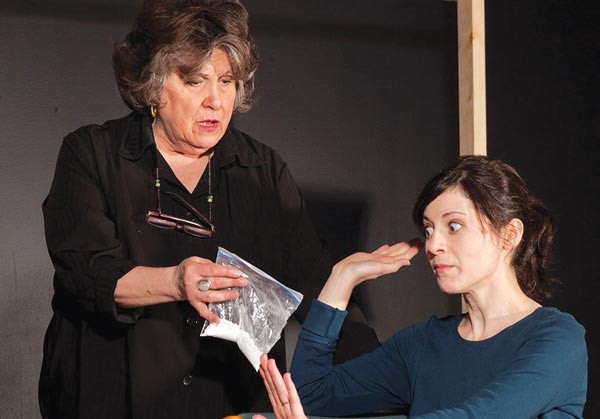 It's difficult to know whether the melancholy lurking underneath Sarah Treem's A Feminine Ending is by the author's design, or the result of the baggage we bring to this local premiere at Off the Wall Productions.

Treem's story is that of whip-smart composer/musician Amanda Blue, a young woman in New York managing her creativity, her man and her self-dramatizing parents.

Amanda has found herself putting her own work on hold to look after the suddenly exploding career of her fiancé, Jack, a singer just signed by a major label. He's a huge talent but a hot mess whose emotional neediness sucks up all her energy. Things get worse when Amanda's mother, Kim, calls with the news she's leaving her husband, David. And while visiting them in their crisis, Amanda meets Billy, her long-lost love from high school.

It's sounds a little soapy, but for the most part doesn't play out that way. Treem isn't going for melodrama; she's looking at the primacy of men in women's lives and wondering whether women can "have it all."

Kim's leaving David because she sees her daughter doing what she did years ago — abandoning her artistic dream to be a wife and mother — and hopes she can shock her out of it.

The melancholy to which I referred isn't the sadness of Amanda's quandary; while Treem doesn't skate over the story's angst, she has written a very smart, very funny play with well-spoken, entertaining characters. The melancholy stems from the fact that plays like this still need to be written.

In my teens, the first sustained political work I did was in the feminist movement of the '70s. I recall lots of movies and TV shows — and reams of print — about women choosing between a career and a man. Yet 40 years later, here we are again. And I wonder whether Treem understands that the simple act of writing about that same struggle suggests that it'll never change. Will we, in a few decades, see a play about Amanda's daughter trying to find her authentic self?

But all that's rather gloomy compared to the big fun to be had from this production, directed by Matt M. Morrow. Morrow's insistence on unadorned playing styles from this company, and his refusal to hit the jokes, is part of what makes this play land so entertainingly.

Judging from their very strong performances, I'd say that the cast's two relative newcomers to Pittsburgh theater, Andrew Wind as Jack and Weston Blakesley as David, are going to be around for a very long time. Shaun Cameron Hall does really terrific work with the not-entirely-credible character of Billy. Ingrid Sonnichsen as Kim is as powerful as she is because she's managed to make it look effortless.

But the play is really a showcase for Erika Cuenca as Amanda, who, in a mammoth performance of intense focus and rock-ribbed conviction, keeps reminding us of the humanity deep inside Treem's compelling script.