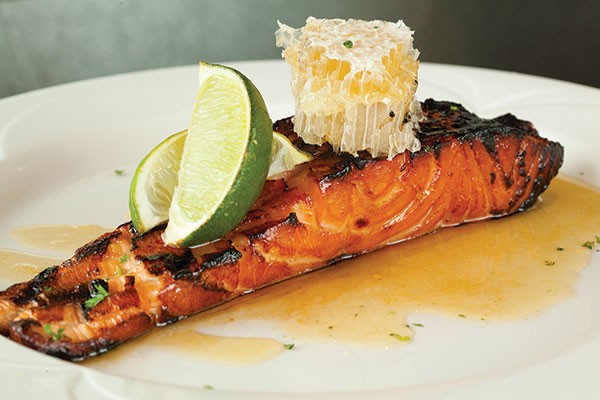 About 15 years ago, Pittsburgh had a minor renaissance of seafood restaurants. The old style was to hide fish or shrimp beneath plenty of butter and breadcrumbs, but the ready availability of a variety of fresh, flown-in seafood changed the game. Even in inland Pittsburgh, a new generation of chefs could now focus on preparations that let fish and shellfish be the stars of the plate.

At the fore of that movement were Glenn and Lisa Hawley, founders of Monterey Bay Fish Grotto. While that flagship restaurant is still going strong atop Mount Washington, the Hawleys have started a new venture in the far northern suburbs, a recent epicenter of upscale and of-the-moment restaurants. Off the Hook, as its name suggests, takes the focus on fish to a whole new level.

The menu is almost exclusively from the sea, with only a handful of other meat dishes, plus one vegetarian; even the pastas are seafood-centric. The fresh-fish section is, naturally, the most extensive, and organized by type and origin of species (e.g. Farroe Islands salmon, Hawaiian escolar). For each fish, a variety of preparations are suggested. These range from classics like meuniere, Oscar and almondine, through more recent trends such as miso and blackened Cajun, to seeming innovations like mojito (marinated in mint and lime, char-grilled and finished with fresh chimichurri). In all, this makes for more than 30 choices of fresh fish alone.

Our first bite came from a simply grilled skewer of tuna, salmon and swordfish that comprised the Ichiban appetizer. The salmon, in particular, was truly extraordinary: rare and meltingly tender, yet with a hint of char and seasoning on the exterior — quite an impressive achievement in a bite-sized morsel. The tuna and swordfish were also excellent, and the ancho-chili aioli was such a tasty combination of spice, tang and savor that Angelique slathered it on our crab cake as well.

That crab cake, all jumbo lump, was finished under a broiler so that the top surface remained loose and uneven, creating crags that browned up beautifully even as the meat within remained moist and succulent. The accompanying remoulade was thick and straightforward, with pickled flavorings reminiscent of tartar sauce.

Cajun shrimp, flash-seared in a skillet for instant crust, were served on a puddle of orange horseradish marmalade. Its fruitiness complemented the Cajun spice, while a jolt of horseradish prevented it from being cloying. A similar trick was repeated in the Maces Bay salad, a simple and appealing combination of tender lettuces dressed so lightly in raspberry vinaigrette that its sweetness was perfectly offset by pungent red onion and tangy bleu cheese.

An entree of Alaskan halibut Parmesan-style didn't involve tomato sauce or a chewy blanket of molten cheese, but rather a thin, nutty Parmesan crust and a pool of rich white-wine lemon cream. The crust brought just a hint of crispness to the halibut's firm, pliant flesh while protecting it from the peril of overcooking, and the combination of cheese and cream was intense, not overwhelming. 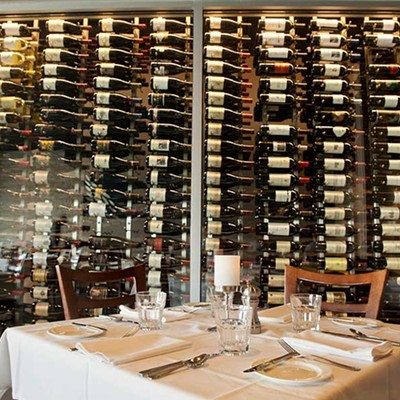 We noted a similar approach with an entrée of salmon atop fettuccine Alfredo. The sauce was light and creamy, not heavy and gloppy, with enough cheese to flavor it richly without weighing it down. The salmon was in rare morsels not unlike the ichiban skewer, with a topping of big, glossy beads of roe.

Four jumbo sea scallops, adorned with a crosshatch of grill marks, were stuffed with crab and herbs, and drizzled with a lemon aioli similar to that in the halibut Parmesan, but a little fruitier. The scallops were firm and sweet, and the crab was judiciously proportioned so that it added distinct flavor notes without going over the top.

Only one dish did seem to go too far, and that was a special of Florida big-eye tuna, stuffed with crab and cream cheese, tempura-fried, and served on a bed of sushi rice with a sweet chili sauce. This combination is not without precedent; it reminded us of crab rangoon or a deconstructed Philadelphia roll. However, those dishes are small enough to ration such richness in manageable portions. This one was, well, off the hook, with nothing to cut the unctuous flavors and textures.

Off the Hook also offers a fresh-oyster bar, expertly curated wine selection and impeccable service. All this doesn't come cheap, but for a top-notch seafood experience, you can't do better than Off The Hook.