Of Montreal keeps it eccentric 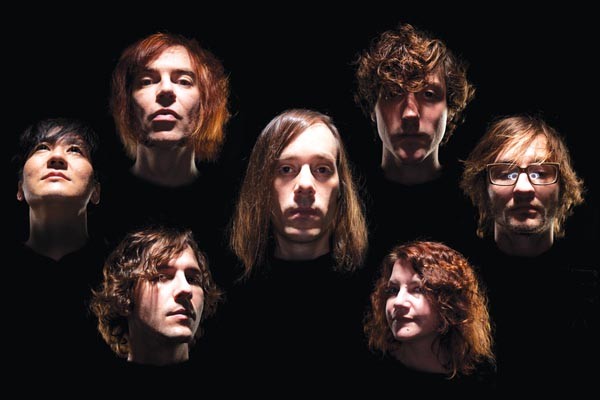 OF MONTREAL with YIP DECEIVER, CHAPPO

For most of us, a night that includes prancing around suggestively in a sequined thong, being lathered head-to-toe in shaving cream or soliciting piggyback rides from hooded ninjas would be an extremely regrettable night on the South Side. For Of Montreal's Kevin Barnes, it's just another day at the office.

The quirky front man and his growing pop troupe have fashioned an enviable career around being the nightly hosts of a wacky psychedelic dance party — complete with multiple costume changes and wildly silly stage antics. But while fans may simply appreciate the Halloween-style spectacle, to the long-touring band, creating the Of Montreal experience is a serious and highly calculated enterprise.

"We do put a lot of effort and time into the preparation," explains Barnes. "We have to do costuming and figure out roles for people. But there is a lot of spontaneity on stage and things evolve over the course of the tour. It's definitely a work in progress."

It may be a fine line to walk between serious performance art and downright parody — but perhaps Of Montreal's brilliance lies in its refusal to regard the two as mutually exclusive. And if 15 years on the road, 11 studio albums and a die-hard fan base is any indication, the Athens, Ga.-based ensemble has clearly hit on a formula that works. But Barnes, who seems to draw from a never-ending well of creativity, isn't about to get too complacent.

"It's good obviously for us to take chances and do different things from tour to tour or album to album," explains Barnes. "For our own creative satisfaction we don't really just want to do the same thing."

Earlier this year, for the tour supporting its latest release, Paralytic Stalks, the band added a stunning psychedelic video-projection component to the live show. But in a testament to just how determined Barnes is to keep things fresh, Pittsburgh will see an entirely new show this month — one that returns to the more playful theatrics of earlier tours and incorporates what Barnes describes as the more introspective material from Stalks.

For a band that is constantly retooling and improvising, one thing seems to stay consistent: A night with Of Montreal is unforgettable — which, to Barnes, seems to be the primary measure of success.

"I want [the audience] to feel like it's an exceptional evening; it's not just every other time that they've been to the club," he says. "I hope the atmosphere is sort of magical and that they have a transporting and positive experience."