Oedipus and the Foul Mess at Thebes at No Name Players

Playwright Sean Graney has informed classical style with contemporary theatricality in a way I'm not sure I've ever seen. 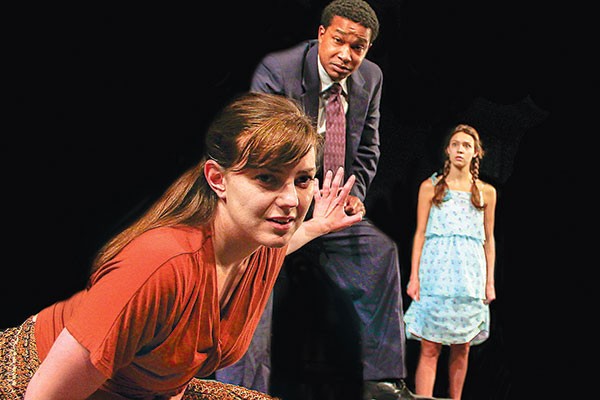 Photo courtesy of Scott Nicklos.
Tressa Glover, Cameron Knight and Colleen Pulawski in Oedipus and the Foul Mess in Thebes.

OEDIPUS AND THE FOUL MESS IN THEBES

It's a very tricky thing Chicago playwright Sean Graney has done with Oedipus and the Foul Mess at Thebes, now making its world premiere under the aegis of No Name Players.

It's not merely an adaptation of Sophocles' "Oedipus Trilogy," which I'm sure you remember comprises Oedipus the King, Oedipus at Colonus and Antigone. He's tossed in parts of Aeschylus' Seven Against Thebes and Euripides' The Phoenician Women, as well — the whole telling the story of one very screwed-up Greek family, in which Oedipus kills poppa, marries mom and blinds himself. Meanwhile his sons go to war against each other, both die, and sis gets in big trouble when she tries to bury one of them.

Loopy doesn't even begin to describe the source material, and it's amazing how Graney's managed to create such a compelling script while staying true to the original. He's introduced humor but not parody, added relevance and given the entire enterprise propulsion and polish.

It comes down, I think, to tone. Graney has informed classical style with contemporary theatricality in a way I'm not sure I've ever seen. And the fact that he makes this new technique seem so natural is his biggest trick of the night.

Steven Wilson provides solid and forceful direction. It might be a bit too busy, but he deserves huge credit for the astonishing performances he's drawn from this impeccably talented cast. Graney's brilliance notwithstanding, this is an unbelievably silly, stupid story, and the cast has to do some very heavy lifting to get and keep it aloft.

Thankfully, the bulk of that strain falls to Cameron Knight and Colleen Pulaski, as Oedipus and Jocasta/Antigone, and these two could assail any barrier. Hitting the stage like hurricanes, they turn in definitive performances. Knight prowls like a wounded lion, generating emotional power with every beat. Pulaski's Antigone is a thrilling blend of emotion battling intelligence. In a breathtakingly written scene where she digs her brother's grave under her uncle's baleful eye, she's extraordinarily moving ... with pitch-perfect support from Ricardo Vila-Roger, as Creon.

Tressa Glover plays the Blind Seer, arguably Graney's most interesting take on the Sophocles original. This plot-device-of-a-character knows everything yet communicates the facts in needlessly recondite riddles. Usually I'm itching for this character to just spill the damn beans already! But Graney turns her into a fully realized character with flaws and frailties. For the first time, I actually buy her not telling all in the first scene. Glover fully inhabits the dimensions Graney has provided and creates a wonderfully complex theatrical figure.

Todd Betker and Patrick Cannon are the warring brothers Polynices and Eteokles, with John Garet Stoker as Haemon, and the three are a hoot playing the blundering comedy of little boys suddenly stumbling into adulthood.

No Name has a big, fat hit on its hands.