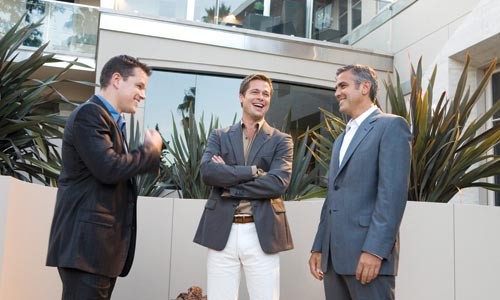 Three of a kind: Matt Damon, Brad Pitt and George Clooney rig another casino.
We first met heist-meister Danny Ocean and his crew in 2001, in Steven Soderbergh's zippy update on Ocean's Eleven, the 1960 Las Vegas casino caper whose chief attraction was its Rat Pack stars. But the charm and insouciance of the remake's ensemble cast and vastly improved pacing made Soderbergh's A-list lark an enjoyable riff.

Then the whole gang, plus one, stumbled badly two years ago in Ocean's Twelve, a disappointing follow-up that relocated the action to Europe, added too many subplots, got too cute with Julia Roberts, and throughout, felt like a party of Hollywood buddies that we hadn't been invited to.

But now, in Ocean's Thirteen, our man Ocean (George Clooney) is back on the job in everybody's favorite rip-off town. His buddy Reuben Tishkoff (Elliott Gould) has been stiffed in a deal with The Strip's newest player, hotel and casino magnate Willy Bank (Al Pacino). Trying to patch it up, Ocean offers Bank a "Billy Martin" -- that's a do-over, not a base-kicking tantrum -- but no dice.

Shifting strategies, Ocean gets the old gang together to execute an extravagant multi-pronged scheme to take down Bank. When Bank opens his new eponymous resort -- a twisty towering triumph of questionable taste over gravity -- Ocean's crew will rig the casino to pay out, and make sure the critic for the prestigious hotel award has a perfectly dreadful time. (Cue the bed bugs.) It's less a matter of personal enrichment than it is a playful comeuppance backed by honor: The boorish Bank has violated the vestigial code of Vegas, which among other touchstones, invokes the hallowed hand of Frank Sinatra.

Some reliable players get short shrift, including Bernie Mac and the group's acrobat (Shaobo Qin). Don Cheadle, as the Brit Basher Tarr, is mostly stuck underground, playing a supporting role to the drill they used to make the Chunnel. (Apparently you can just rent this.) Pacino, with a terrifying red dye job and criminally shiny tailoring, makes an entertaining villain, without chewing too much scenery, while Ellen Barkin, all over-flowing boobs, plays his aide.

Soderbergh lines up his players in a script by Brian Koppelman and David Levien, who also wrote the 1998 poker talk-fest drama Rounders. Plenty of Thirteen's story defies how the hotel and casino business really operates, but who wants a two-hour yawner about contract arbitration? Ripping off a casino -- and rewarding unsuspecting gamers -- is a fantasy we can all get behind, and it's nearly enough to hold together what often feels like disconnected skits and way-out-there gimmicks that never gel as a solid narrative.

Because the larger idea has some effervescence, it's a bit of a drag when too many of Ocean's rigs involve the pedestrian use of a bribe. And even though it's loaded with artificial intelligence and sophisticated biometrics, "Greco," the super-advanced security system at Bank's casino, still resembles an old-fashioned foil -- a bank of blinking-light computers in a glassed-off room, that needs only to be unplugged.

Some of the gags play either too broad -- such as the thoroughly besieged hotel-rater (David Paymer) -- or too long (dice-rigging adventures in Mexico). Mostly, though, the film moves quickly and stays perky and entertaining. Thirteen isn't a royal flush, but it's a got a few good cards, and thus is lazy mid-summer fun.

I must quibble though, that despite being slammed for the precious insiderism of Twelve, Soderbergh can't resist an unnecessary bit of solipsism at the film's end, involving Clooney, Pitt and their well-documented off-screen lives. Sigh. If we're asked to suspend our disbelief to buy into the fiction, can't Soderbergh keep his end of the bargain? Is there not even two hours safe from the specter of Brangelina?