Ocean Vuong, one of the "most important writers of the early 21st century," to headline virtual Pittsburgh event

Photo: Tom Hines
Ocean Vuong
There is no single way to categorize Ocean Vuong’s first novel, On Earth We’re Briefly Gorgeous (Penguin). It is by turns a coming-of-age novel, an immigrant’s tale, a LGBTQ story, a fictionalized memoir.

While writing the novel, Vuong was told by editors and peers to pick a single subject or theme. Instead, On Earth is the rare book that lives up to the line from Walt Whitman’s poem Song of Myself, “I contain multitudes.”

Vuong appears in a virtual lecture on Mon., March 22 as a guest of Pittsburgh Arts & Lectures’ Ten Evening Series.

A Vietnamese native who arrived in the U.S. when he was two, Vuong, 32, is already one of the most important writers of the early 21st century. His first full-length poetry collection, Night Sky with Exit Wounds, earned the Whiting Award for Emerging Writers and the T.S. Eliot Prize for poetry. On Earth We're Briefly Gorgeous debuted at No. 6 on the New York Times’ bestsellers list and was a finalist for a PEN/Faulkner Award. He was awarded a MacArthur Fellowship in 2019.

Those successes, however flattering, still seem surreal, especially since he was told that as a poet he should expect to be unread.

“I was always prepared for that, and this is kind of the other side of that possibility,” Vuong says. “I’m more concerned about what I’m trying to write now. I don’t feel triumphant at the moment.”

Vuong grew up in a poor section of Hartford, Conn., with his mother and grandmother. After graduating from high school, he enrolled at Pace University in New York to study business, deferring his dream of writing to launch a career that would enable him to earn money to help his family. 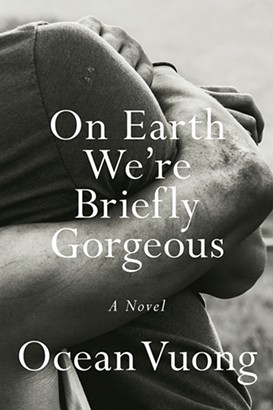 His study of business didn’t last — Vuong describes his tenure at Pace as “an espresso shot. I had a cup of coffee there.” But he learned one invaluable lesson from his brief attempt to study business.

Vuong says he literally walked out of a business class on a beautiful autumn night and strolled across the nearby Brooklyn Bridge, thinking he had to find another way to accomplish his goals.

“That changed my life,” he says.

Vuong was determined to write in a way that mirrored his beliefs about storytelling, that reflected not his gift for writing, but “a disposition, an outlook,” he says. On Earth reflects that determination to mirror the world in a unique way, to craft sentences that probe and prod and prick a reader’s sensibility about what is possible.

“What you’re seeing as a dexterity in sentences is risk taking,” Vuong says. “The contemporary trend is to have a subdued, laconic, clear Hemingway-esque sentence. ... I wanted to risk it. If I’m entering a new genre, I wanted to see where the borders were, what could happen. I wanted to test it, like you hammer steel to see how far it can bend.”

Vuong found a precedent for what he wanted to write in Herman Melville’s Moby-Dick. He calls that novel a travelogue, an essay on whale hunting, an ontological quest for American identity, “with queer aspirations in it as well,” he says.

“All of it was there, nothing was taken out,” Vuong says. “I was really inspired by Melville in his ability to say, 'I will say no to nothing.'”Ten Evenings with Ocean Vuong. 7:30 p.m. Mon., March 22. (Available online for one week.) $15. $10 for students. pittsburghlectures.org