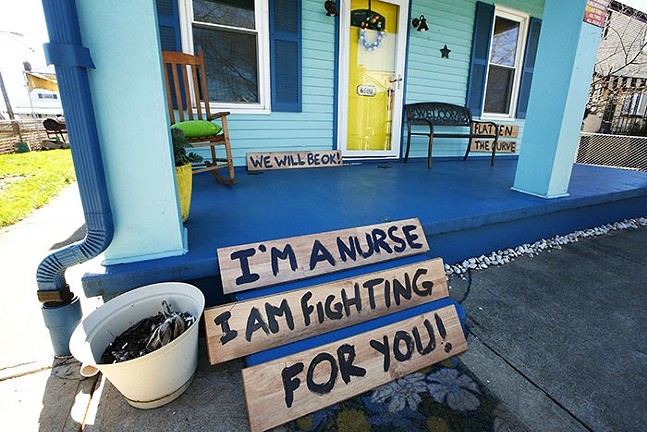 CP photo: Jared Wickerham
Signs on a front porch in Stanton Heights, spring 2020
Last year, hundreds of nurses at West Penn Hospital in Pittsburgh’s Bloomfield neighborhood formed a labor union in hopes of pressuring the hospital into delivering investments for the recruitment and retention of nurses. This push followed in the steps of nursing unions across the state in asking for better staffing ratios and working conditions for nurses, who have borne the brunt of work, stress, and risk during the COVID-19 pandemic.

Now, after a failure to reach those benefits in a union contract, the 650 nurses at West Penn Hospital have voted to issue a strike notice to West Penn management. A date has not been set for a work stoppage, and negotiations between union members — organized through SEIU Healthcare — and management are ongoing.

Melissa Gates, a postpartum nurse at West Penn Hospital, said in a press release that she hopes to reach an agreement and avoid a full-fledged strike. Nurses will be meeting again next week to make those final decisions.

“Despite months of negotiations, West Penn management has failed to make the kind of investment needed to recruit and retain nurses. We want to work hard over the next week to try and reach a settlement that ensures our patients will continue to get the high-quality care they expect,” said Gates in a press release.

West Penn Hospital is managed by Allegheny Health Network, and in a statement to WTAE the health care group said: "We continue to participate in good faith bargaining to reach a contract with our SEIU represented nurses at West Penn and we remain confident that an agreement can and will be reached that is fair and competitive for our employees. We prefer to keep our active negotiations with the union at the bargaining table and will not be discussing details publicly at this time."

According to SEIU Healthcare, the COVID pandemic only worsened a staff shortage problem at hospitals across the country, and actually caused a lot of nurses to leave the field, which made the problem worse.

Sam Miller, a labor and delivery nurse at West Penn Hospital, said that nurses' needs are being ignored in this shortage issue, and Miller believes the hospital industry could do more to address it. In March, AHN told health news site Fierce Healthcare that its patient volumes have been rebounding since 2020 and have nearly returned to pre-COVID-19 levels.

“Nurses know what’s needed at the bedside and what we need to provide the best quality patient care,” said Miller. “But we’re not being heard, which is particularly frustrating after the incredible dedication nurses have shown during the pandemic. These issues require immediate action. West Penn needs to step up and make a major investment to help us recover and rebuild our frontlines.”

Another contract negotiation session is scheduled for July 29.