For meta-theatricality, it's hard to beat the following: In 1985, Dan Groggin created the off-Broadway musical Nunsense. The show includes a number about understudies called "Playing Second Fiddle," which features the lyric: "This girl Lenora Nemetz / has it on her résumé / that she understudied everyone."

Jump-cut to 2010, and me sitting in the audience for Pittsburgh CLO Cabaret's new production of Nunsense. And who's singing that line but Lenora Nemetz herself!

The Pittsburgh-based stage veteran is back in town after the recent Broadway revival of Gypsy, in which she played Mezzepa. But as tempting as it must be to sing a song about yourself, I sure hope Lenora didn't come back just for this.

Nunsense is a community-theater staple, and the second-longest-running show in off-Broadway history. It's about an order of nuns staging a benefit to bury five nuns currently stacked in the freezer, who died from tainted vichyssoise.

Considering how long I've been a critic, I've been remarkably successful avoiding this show. It's impossible to have never seen it, of course, but over the years I've managed to miss most productions.

The upside to that should be obvious. The downside is that, because I haven't seen it in about 15 years, seeing it now is like being assaulted all over again.

It feels a little bit pointless to come down on a show this vapid. But honestly, can't something be done about the jokes that aren't funny, the melodies without art, lyrics without wit and a plot without sense? The whole thing lurches from one tuneless number to the next, with a cast of five doing everything they can to make an audience laugh except forcing them at knife-point.

And really, if this cast can't make this show work, nobody could. Terry Wickline, Christy Rodibaugh and Leah Hillgrove do what they can with the little the script has given them. Brittany Ross plays with a comedic style that's a cross between Judy Holliday and Billie Burke, and considerably livens up the evening.

Nemetz, meanwhile, has almost nothing to do in the first act, and gets to unleash her legendary talents only in Act II. When this powerhouse uses all of her skills on one of Groggin's meager tunes, the gulf between singer and song couldn't be greater. 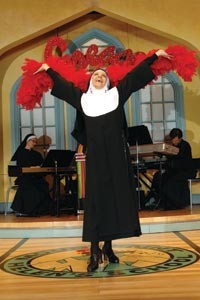 Wings and a prayer: Lenora Nemetz in Pittsburgh CLO's Nunsense