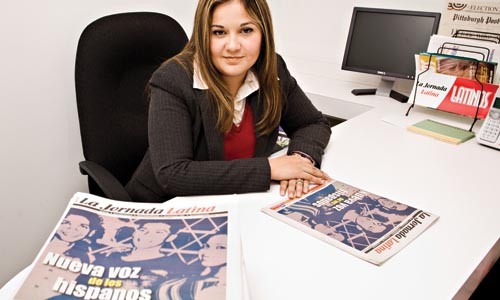 As any publisher will tell you, if you're going to launch a newspaper in Pittsburgh, you'd better find an untapped market. Fortunately for Brian Wiles, he thinks he's got one.

In January, Wiles and a media company he co-owns launched La Jornada Latina, a Spanish-language monthly paper geared toward Pittsburgh's Latino and Hispanic populations. The cover of the 40-page February edition proclaimed it a "Nueva voz de los hispaños" (New voice of the Hispanics).

"We look at it as an opportunity to jump-start the community," says Wiles, co-owner of La Jornada Latina's publisher, TSJ News, on the phone from his Cincinnati office. Wiles says much of the cultural infrastructure to support a Spanish paper is in place in Pittsburgh. "Our newspaper gives [the people] a chance to connect the dots."

The paper is distributed free at more than 150 sites; Wiles says he'll print a minimum of 5,000 copies for each issue.

Though the paper is based in Pittsburgh (with an office in Aspinwall's Pittsburgh Metropolitan Area Hispanic Chamber of Commerce, at 6 Loop St.), it promises to cover Washington and Butler counties as well. It's also online at tsjnews.com.

Almost all of the content is in Spanish, but it's not all about Pittsburgh. The first issue featured nine pages of wire-news stories from around the world. A two-page section focused on immigration and legal help.

In the Opiniones section, Lourdes Sánchez Ridge -- senior counsel with Thorp Reed & Armstrong, and president of the Hispanic Chamber of Commerce -- wrote a column on the civic responsibilities of immigrants.

La Jornada is unquestionably the only paper in town to lead off its February sports coverage with a splash photo of Spain's Rafael Nadal -- who, while being the top-ranked tennis player in the world, wasn't expected to contribute much to the Super Bowl (which was previewed three pages later, after soccer, Joe Torre and boxing).

La Jornada Latina's ¿Que Pasa? (What's up?) section led with a feature on the Carnegie Museum of Natural History, penned by staffer Alejandra Quezada-Crowder, and followed up with some arts and culture wire copy -- including a syndicated piece on the two-part Che Guevara flick (starring Benicio del Toro) that's set to be shown at the Harris Theater in late March.

For aspiring polyglots, La Jornada offered one article (a story about the transition to digital television) side by side, in both English and Spanish.

Pittsburgh might seem like an odd expansion target for a Spanish-language newspaper. Only 1.2 percent of Allegheny County residents are of Hispanic or Latino origin, according to 2006 Census estimates. That's roughly one-tenth of the national average.

Is there a "giant population [in Pittsburgh]? No, not really," concedes Wiles, who himself is not Hispanic.

But La Jornada Latina is designed to survive in smaller markets: The paper is already published in Detroit, Dayton, Columbus, Northern Kentucky and Cincinnati.

The Latino and Hispanic communities account for 2.5 percent of Columbus' population, and 5 percent of Detroit. Cincinnati, which serves as TSJ News' home base, has roughly the same population mix as Pittsburgh. "We started this paper in Cincinnati in '99 with no Hispanic population," Wiles says.

In fact, serving a relatively small Spanish-speaking population is part of La Jornada's business plan. Wiles says, "We're never going to be able to survive in Chicago" -- where nearly one out of seven residents is Latino or Hispanic, and where there are already several Spanish-language papers.

Wiles also believes, however, that Pittsburgh's Hispanic and Latino communities are set to expand. "The white-collar crowd is already there," he says, thanks in no small part to the city's universities. And in the blue-collar and service sectors, the local workforce is aging. "Who's coming in to replace them?" he asks. "There is a lot of opportunity."

"Even though the population is very small [compared to other cities,] it's really growing tremendously," says Martha Mantilla, who runs the Eduardo Lozano Latin American Collection at the University of Pittsburgh. "The growth is very noticeable."

Mantilla doesn't frequently check statistics and surveys, but based on anecdotal evidence, she predicts that the 2010 U.S. Census will show an increase in Pittsburgh's Latino and Hispanic numbers. "When you go to different supermarkets, you see more Hispanics," she says. Mantilla has also seen a more diverse audience at the Amigos del Cine Latinoamericano film screenings, which she helps curate.

"The original plan ... was to get the academic community involved [in the screenings]," she says. But now, with a growing interest from Latinos outside academia, "It's a really nice variety."

Mantilla sees La Jornada playing an important role in linking that population together. "There are so many services for Latinos right now, and my feeling is that some of the people don't know about all of those," she says.

Wiles says the February issue was a "soft launch" of the paper, to help iron out distribution plans. He expects a bigger push around April or May.

For cost reasons, much of the shared work of the La Jornada chain (such as laying out pages) is done in Cincinnati. The paper currently has only one local staffer, Alejandra Quezada-Crowder, who runs the one-woman office like a community newspaper, juggling the responsibilities of selling ads and writing content. She splits writing responsibilities with freelancers, and other outside contributors -- including representatives of the Pittsburgh Metropolitan Area Hispanic Chamber of Commerce.

Quezada-Crowder came to Pittsburgh about nine months ago and is still adjusting to a new climate and city. But neither a Pittsburgh winter nor the challenge of launching a newspaper has scared her off.

"I really enjoy being a pioneer," she says. "It's exciting and different to be here in Pittsburgh."

Quezada-Crowder says that, like "every other Hispanic in the area," when she first arrived in Pittsburgh, she "didn't know how many Hispanics were in the area. ... With the paper, that's going to change."

Quezada-Crowder hails from Mexico by way of San Diego. In Mexico, she worked about four years at the Televisa broadcast network before moving to California -- where she learned English, met her husband and held a job as a news reporter/producer at Univision.

She says that arriving in Pittsburgh and seeing no Spanish-language media "was a shock for me. ... In California, everything is actually in Spanish."

The number of city-names ending in "burg" was the first sign that she was a long way from the San Andreas Fault. But when a Port Authority bus passed by with Cyrillic lettering on its side, she realized, "I feel like I'm living in Europe." Not to mention that "You can tell that the streets have been there for years and years.

La Jornada is finding its way too -- but Wiles is already thinking in terms of expansion. He says the paper might someday reach as far as Erie, making it a regional publication. And in 2010, the paper might start publishing every other week, perhaps adding two or three staffers.

Quezada-Crowder says the current monthly format and production schedule don't lend themselves to hard-news pieces -- but that could change down the road, if the paper goes biweekly.

For now, though, the chief goal is to help knit a community together.

"People can use the paper to be informed, but also to know their next-door neighbor," says Quezada-Crowder. "The main thing is to get everybody together. ... Pittsburgh needs something like this."