Local musicians sound off on why they live where they do

Sure, there are plenty of venues in, say, Lawrenceville. But there's also inspiration to be found in the nature of Frick Park, and the sweeping vistas of Mount Washington. Where's a musician to settle down in Pittsburgh? A few local singers and players let us know why they choose to stay where they stay.

My parents moved to the North Side in 2007 while I was living abroad. Broke, I ended up back home. I started meeting some new friends, mostly at The Park House, and was also doing some project recording at Mr. Small's North Side studio at the time. Eventually, I found a giant space of my own near Allegheny General Hospital in 2008, [which] Coronado started playing out of in 2012. I like the location because it is centrally located, and it's easy to get anywhere else within the city and region. It's also really laid-back, including on weekends. Venues like The Park House and James Street have no cover charge, and feature a wide range of musical genres and top-quality performers. I tend to think that most people who play at these places are "North Side musicians," or at least a part of the story and character of the area. 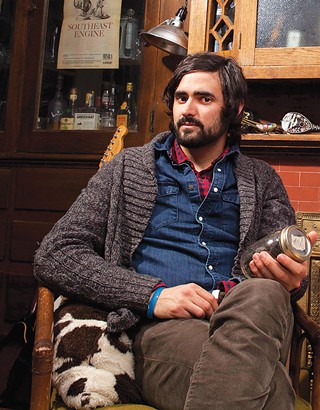 Brookline is a sweet little town where by day, you can grab a great cup of coffee, a paczki (when in season), a book at the library, a taco at Las Palmas, and certainly, a haircut ... you can even visit a cobbler. Since Cannon Coffee opened (in 2010), there's been this huge revitalization effort of community, art and walkability. I know my neighbors and they know me: We shovel snow together, wrangle stray cats together, shout niceties across the street, and cook out some Sundays. The place is residential, so at night, all is quiet and calm, except for [Brookline] Boulevard, where you might hear a Frank Sinatra song creeping from a bar, and the sound of an occasional passing car. Oh, and another thing: Cannon Coffee's open mic is the only one I've been to where it's normal for everyone to be quiet and attentive. You don't have to be in the clique for people to pay attention to you, like at some places. Brookline is our little secret, and no one knows about it but us. Where is this going to be printed, again?

I live in Homewood, and spent much of my childhood here as well. For me, living in Homewood is a lot about being close to family and a community I'm familiar with. It's also close to East Liberty, where I currently work as a teaching artist and soloist at East Liberty Presbyterian Church. I occasionally perform in Homewood at venues like 7101 2nd Time Around, for a spoken-word open-mic event called Eargasm, and at Cabaret, a beautiful venue run by Simone Godson. I've always known Homewood to have a vibrant community of musicians and artists, in part due to the Afro-American Music Institute, where I first took music lessons as a kid. There is also The Jazz Workshop and jazz performances that happen year-round at the Homewood Carnegie Library. This only scratches the surface of venues and businesses that have historically supported and promoted local artists.

Bloomfield, Lawrenceville, Garfield, Friendship and even Polish Hill are part of a constellation of neighborhoods that fit together quite nicely, I think. But while Lawrenceville has the nightlife and Garfield has the art galleries, I'd much rather rest my head in Bloomfield at the end of the day.

Where else but Liberty Avenue would you find three independent bookstores? The music scene is likewise stubborn and scrappy. We make venues of record shops, art galleries and even our own homes. We perform on found instruments. We learn crafts like glass-blowing and then trade our lopsided vases for studio time. We are harder on ourselves than we need to be, because we try to invent what we can easily buy. There is a quixotic heart that beats in Bloomfield, and that's why I'm so proud to call it my home.

Also, the seitan wings at Spak Brothers in Garfield are bomb. I cannot stress this enough.