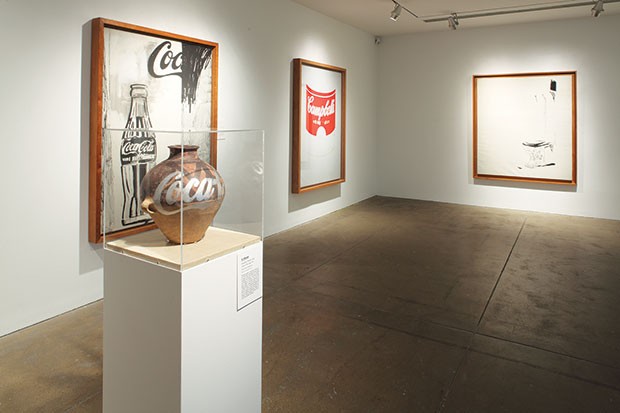 Installation view of Andy Warhol | Ai Weiwei at The Andy Warhol Museum
There are countless ways to vilify 2016. But let’s not dwell on it. Instead let’s celebrate artists who use their creativity as a form of activism.

The highest profile artist-activist to show this year was Ai Weiwei in Andy Warhol | Ai Weiwei, at The Andy Warhol Museum and the Carnegie Museum of Art. Despite scrutiny and persecution by the Chinese government, Ai expertly uses his art as well as social media as tools for dissent. While social media can be a font of misinformation (that can lead to someone shooting up a pizzeria, for instance), it has become an essential public forum.

But as a virtual space, social media can’t replace the need for physical spaces. The exhibition Building Optimism: Public Space in South America, at the CMOA, focuses on architectural projects intended to improve the daily civic lives of people living in cities such as Medellín, Caracas and Rio de Janeiro.

The optimism that motivates this renewed commitment to design in service of the public good also existed during a period in Brazil that inspired architects like Oscar Niemeyer and artists like Hélio Oiticica, prior to the 1964 military coup. Considered to be one of the most important Brazilian artists of the 20th century, his work in Hélio Oiticica: To Organize Delirium, at CMOA, shows his innovative efforts to turn viewers into participants both in the museum and on the streets.

Interactive work is now quite common in contemporary art and was part of the appeal of artist Richard Pell’s Artist of the Year exhibition, The Myth of the Great Outright Extraordinary!, at Pittsburgh Center for the Arts. Pell’s work explores the complex stories that both ordinary and extraordinary people and objects tell, particularly at the intersection of science, engineering and culture. By focusing on ambiguity, Pell compels us to prioritize questions over answers.

Questioning the dominant narrative and celebrating the sacred in ordinary lives is what local artist-activist Vanessa German is all about. Her beautiful show Introspective, at the August Wilson Center for African American Culture, combined her well-known assemblage power figures and Stop Shooting posters with ravishing Black Madonna icons painted on paper tissues and towels.

Also expressing difficult subjects, such as her personal struggle with illness, by way of beautiful objects, were pieces by Sarika Goulatia, shown in multiple venues throughout the year.

Environmental issues were addressed by the Re:New festival, a highlight being “Hull,” by Ian Brill. And the bees, bugs and landscapes on display in both All Around Us and Pastoral Noir, at Wood Street Galleries, reminded us that we are not alone on this earth.

In our current political climate, our identities, our health and our environment have become particularly contentious issues. But for those of us who remember the political and social upheavals of the mid-20th century, the Toys the ’50s, ’60s and ’70s show at the Heinz History Center was a nostalgic treat that reminded us of the importance of creativity, particularly in uncertain times.