(Not Quite) Buried Treasure

A new vision for Allegheny Center rises to the surface 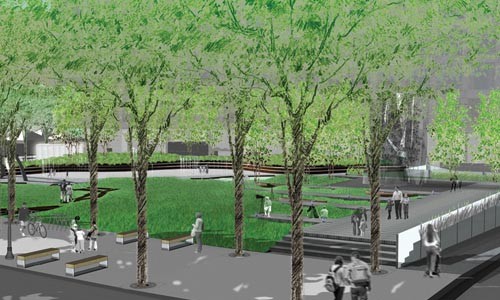 Architects don't bury their mistakes, the old saying goes: They just cover them with ivy. While the idea may be less applicable in an age of glass curtain walls and undulating titanium sheets, some judiciously applied greenery can still go a long way toward mitigating design errors. And since this is also an age of increasing appreciation for good landscape architecture, re-imagining an astringent concrete-lined space as a lushly planted one can even become part of a larger program of artful city building.

It would be easy to bury the mistake that is Allegheny Public Square, the uninviting plaza outside the Pittsburgh Children's Museum on the city's North Side. Once a lively open plaza at the center of the City of Allegheny, it was reconfigured a few times during the 20th century. Then, in the 1960s, urban renewal treated the site like a mob informant: It was loaded down with concrete and sunk, seemingly for good.

The plaza was burdened with hard-edged terraces, potted trees and a (no longer functioning) fountain below street level. Simply filling it with dirt and planting some grass would have been a big improvement.

But the Children's Museum has distinguished itself over the past few years by using international design competitions, punctuated with community meetings, both for its building addition and for its "Charm Bracelet" project for episodic neighborhood revitalization. (I have been a volunteer adviser for some phases of these projects.) Recently, the museum received the Rudy Bruner Award, a national prize for "innovative models for addressing some of our country's most persistent urban ills" -- just the latest in a string of awards for the museum's efforts. The $50,000 accompanying the Bruner Award funded the next round of charettes and competitive designs, this time for the plaza.

Notable too was the series of community design charettes. The public gatherings were "a wonderful platform for us to get acquainted with the project and the neighborhood," according to the competition winner, San Francisco-based landscape architect Andrea Cochran.

Her design incorporates some functional elements of the old plaza, such as a fountain and an area for viewing performances, but reconceives them in a much more green and interconnected fashion.

In the northwestern section of the square, Cochran takes inspiration from Pittsburgh's rivers to create "meadow mounds": low waves of picturesque, grassy earth that are also traversed by walking paths in straight and irregular configurations. Really, the whole park is a meditation on nature, inflected by healthy conjunctions with the city. The slightly wavy diagonal walking path across the plaza focuses on the historical unifying spire of the square's old Carnegie Library. Yet the path is particularly river-like, and another mound along its curved edge creates a useful spot for groups to sit for performances. "We want to create opportunities for things to happen," explains Cochran. Construction is planned for 2009.

One of those opportunities is artist Ned Kahn's steam sculpture, which shapes mist in response to the movements of pedestrians. Another is the ordered profusion of benches and trees at the edges of the square, which create "almost a front porch for the park," Cochran observes.

The sense of nature is functional as well as formal. A bioswale -- a planted landscape designed to filter storm-water runoff -- will serve as both picturesque element and potential educational device for children to learn about sustainable design in the landscape.

The presentation drawings are thorough and convincing, especially for a relatively small-scale competition. But Cochran fully embraces the process of community interaction as well. "I think the whole design needs to be vetted and get another layer of ideas from the neighborhood to get to that next step," she says. Such interaction is much more promising than simply letting the stones and the plants fight it out among themselves.