Not Medea blurs the lines between modern parenting and Greek tragedy 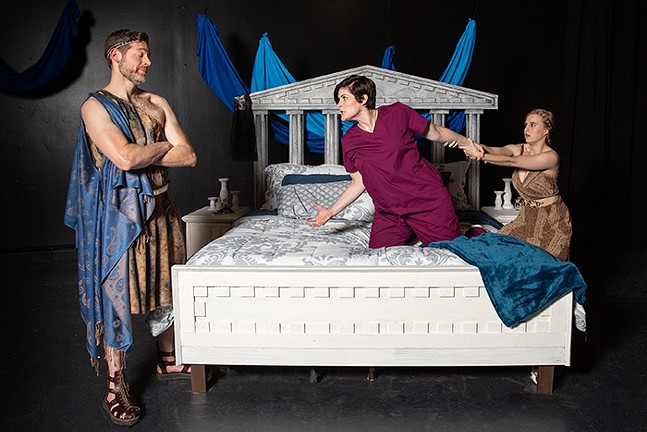 The program for off the WALL's production of Not Medea features a handful of quotes about motherhood, but they're not exactly cross-stitch material. Most notably, there's this gem from Katharine Hepburn: "Being a housewife and a mother is the biggest job in the world, but if it doesn't interest you, don't do it. It didn't interest me, so I didn't do it. Anyway, I would have been a terrible parent. The first time my child didn't do what I wanted, I would have killed him."

Maybe it's just our touchy modern ears, but generally people feel uncomfortable expressing contempt or violence towards their children, even if they're just fleeting fantasies. That tension between societal expectations and honest expression, particularly when it comes to motherhood, is at the center of Allison Gregory's Not Medea, a fourth-wall breaking meditation on guilt and anger that takes place at a live performance of Euripides' 431 BC play, Medea.

Let's start with the Greek classic and work forward. Things begin in Corinth with Medea's husband Jason informing her that he plans to ditch her for a younger, richer princess. Long-brutal story short: Medea kills the bride-to-be and her dad, as well as her own two children as a way to get back at Jason. She poisons their robes. Who knew?

Not Medea is not quite so dramatic, but it's harrowing in its own way. The protagonist, known as "woman" (Drew Leigh Williams), shows up late to the performance of Medea we're about to see. She's in scrubs, appearing to just have gotten off a shift as a nurse, and starts sharing bits of her story by way of apologizing to the other theater-goers. (Fourth-wall breaking makes some people uncomfortable, but it's handled pretty tastefully here.)

Eventually, the real Medea starts (Elizabeth Boyke as the chorus, Allan Snyder as Jason, and "woman" alternately portraying herself and Medea). It turns out the nurse has a number of things in common with Medea and no shortage of defenses of her actions, though, as the title underlines, her main charge during the 90-minute performance is explaining to the audience how their stories are different in crucial ways. Without saying too much, the nurse has endured horrors of her own, and while not quite Greek in scale, they are still brutal. Reminder: jokes about killing children tend to not go over well, and even less so in the aftermath of tragedy.

The early scene-setting and backstory exposition can be a little bit of a drag, but once the lines get blurred and we descend deeper into the original Medea, the chemistry and momentum fall into place. As the show wears on, the subtle flourishes that indicate the shifts between the play and the play within the play create a nice rhythm (nod to lighting director Paige Borak and director Allison M. Weakland), and against all odds, the audience is lulled into the back-and-forth between worlds that eventually bring the nurse and Medea both closer together and starker in contrast.

It's hard to imagine someone having such encyclopedic recall of a 2,400-year-old Greek tragedy, but maybe there's just something about this one that hits too close to home.