'Not fussy, but not your typical fare' rounds out the menu at Independent Brewing Company | Restaurant Reviews | Pittsburgh | Pittsburgh City Paper 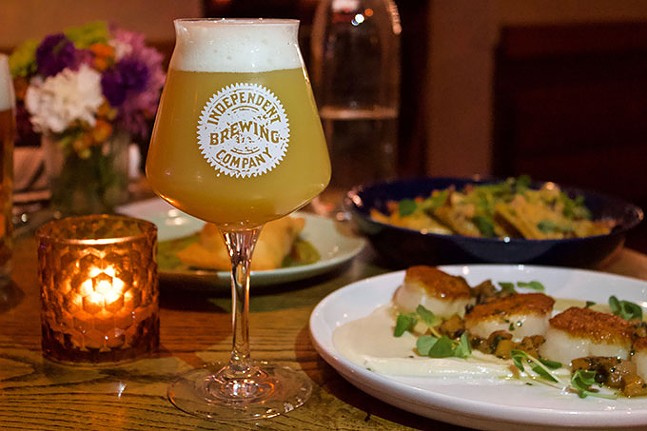 
Independent Brewing Company has a "terrible name," according to owner Peter Kurzweg. And it's true that it's a bit of a misnomer: The Squirrel Hill tavern doesn't brew a single beer, but serves in support of other independent, craft breweries.


Kurzweg opened the bar with his brother six years ago, only five days after they took over the space. The duo designed it in the style of a pre-prohibition era “cartel,” as Kurzweg calls it, a group of local brewers that joined together to sell their beer under a shared label. Kurzweg sees Independent as a “modern analog to that.”


Today, Independent Brewing Company isn’t exclusive to local brewers, though Western PA breweries still have priority. Kurzweg says that about 90 cents of each dollar from the tavern stays local.


The tavern’s food menu is run by Jamilka Borges, an acclaimed chef known for her time at Bar Marco, Spoon, and now, the trio of Hidden Harbor, Lorelei, and Independent Brewing Company, which are under the same ownership.


Independent Brewing Company may be beer-focused, but Borges’ menu is far from the typical bar food. Her fall menu features a Kerala-style flank steak, homemade sweet potato ravioli with pan-fried sage, and empanadas.

“At the end of the day, we are a neighborhood restaurant,” says Borges. “And that’s what we are trying to be. Not fussy, but not your typical fare.” 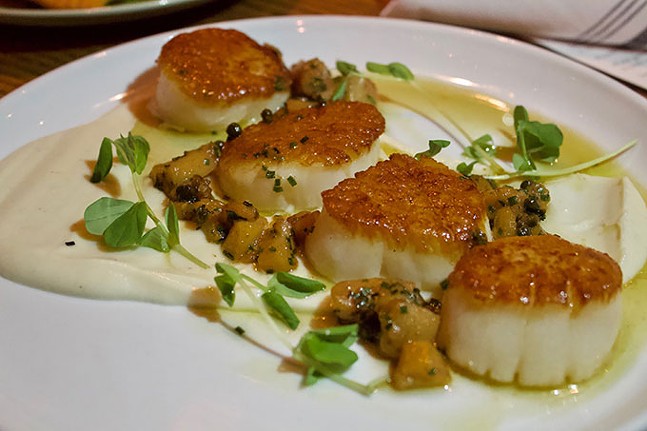 During an evening visit, I had four items from Borges’ short bill of fall dishes: mussels in a coconut curry, loaded sweet potatoes, melted aged provolone, and wheat gemelli.


The execution was hit or miss. My bowl of mussels, paired with squash, basil, and grilled focaccia, was almost unbearably salty, though at the same time, syrupy sweet. A gigantic bowl of homemade gemelli pasta was delicious, paired with Brussels sprouts and pomegranate to break up the lush parmesan sauce.

Melted provolone, paired with an Italian eggplant dish, caponata, was tasty but too rich to eat a whole plate. Caponata was the most interesting piece of the plate — the provolone was a bit flat — and held a deep, roasted stew-like flavor.

The chef’s loaded sweet potatoes were a triumph; I couldn’t get enough of the dish. Huge chunks of crispy sweet potato — almost as big as a whole baked potato — were topped with kimchi and crema. A smart addition of miso added a subtle savory flavor that balanced the sharp kimchi.


Borges, as Kurzweg puts it, has seen the “top of the culinary mountain.” Her culinary influences come from everywhere — Puerto Rican, Italian, and French cuisines, restaurants she has worked in across the country — and the menu gives craft beer drinkers the chance to expand their palates past typical pub food.


“One area where craft beer needs to improve — and it needs to do quickly — is start involving more people and more cultures,” says Kurzweg. “I think part of that is to have an empanada with your beer instead of a burger.”

Alternate Histories has taken over the back wall of Independent, and it’s wonderful. Look to the frame-covered wall for dinosaurs rampaging through the ‘Burgh!

If beer's not your thing, the pub has an interesting list of cocktails. Try the Indian-spiced Dark & Stormy.

Despite Kurzweg's quote above, Mondays at Independent Brewing Company are burger night. "A burger a week probably never killed anyone ... right?" says Richard F. Independent, the tavern's "founder" on the restaurant's website.