CP Photo: Jared Wickerham
Istanbul Corner owner Marwan Elkardoudi
For 17 years, Marwan Elkardoudi worked in kitchens making unique dishes. During that time, he also learned the skills needed to manage a business and always hoped to operate his own restaurant one day. In late 2020, he finally achieved his dream and opened Istanbul Corner, a take-out Turkish restaurant on Pittsburgh’s North Side.

Unfortunately, Elkardoudi’s dream is in peril. Since the initial highs of opening the space, Elkardoudi has watched as his customer numbers dwindled until profits were gravely affected. Within six months, his chances at building a thriving business seem near-impossible, some of it affected by things out of Elkardoudi’s control. He began to notice prices for supplies doubling, likely a side-effect of the pandemic, including how the price of chicken more than doubled.

On East Ohio Street in the city’s historic Deutschtown neighborhood, Istanbul Corner resides alongside numerous other small businesses, such as Priory Fine Pastries and Lillen's Pizza and Restaurant. The area has a wide variety of small shops, banks, barbershops, and restaurants enjoyed by the community.

Once inside Istanbul Corner, one might notice the restaurant’s blue walls or wood paneling on the buffet table, holding the restaurant’s colorful array of take-out dishes. However, the first thing to usually catch customers’ eyes is the kitchen. It isn’t hidden behind a wall or in another room; its prominence in the space ensures that it isn’t missed. This allows customers to see Elkardoudi prepare their meals and take orders at the same time. They also get to see how humble and charming the take-out restaurant is, with Elkardoudi ready to greet customers as soon as they enter the front door.

Elkardoudi said he has been thankful for the community support in his short time running Istanbul Corner, and for those who patronize his business.

“They [the North Side community] try their best,” he said. “There is always a limit for what a person can do, and a kind word motivates me. It means a lot when someone stops by to say nice words to me.”

While Elkardoudi keeps fighting these challenges to help keep Istanbul Corner open, the North Side community has been rallying behind him. To assist with expenses, Elkardoudi created a GoFundMe page asking for financial support for his restaurant. The funds from his request will go towards keeping Istanbul Corner from closing and to help with the supply shortage many restaurants face today due to the pandemic.

Before he opened his own restaurant, Elkardoudi had an extensive background working in the restaurant industry. After he got his culinary degree, Elkardoudi worked with Istanbul Grille owner Coskun “Josh” Gokalp, where he was taught the ins and outs of the kitchen.

“The area in the North Side didn't have any different food outside of the usual,” Elkardoudi says. “The lack of vegan and vegetarian, or Middle East or Turkish foods, made me work on a menu that has variation and a lot of options, including specialty meat dishes.”

CP Photo: Jared Wickerham
Owner Marwan Elkardoudi serves a customer inside Istanbul Corner in the North Side.
Istanbul Corner provides a wide variety of Turkish meals. Some of Elkardoudi’s favorite dishes include his cook’s special, which is cabbage, chickpeas, beets, and a salad. He also offers customers the choice of a small or large meal, which comes with salad, rice, three sides, and a choice of meat or rice, and a choice of six sides as a vegan option.

These dishes have become noticed by some in the North Side, who support Elkardoudi’s effort.

"We've always been impressed with the food and service, and when we heard they were struggling we really wanted to help out,” says North Side resident Chris Rapier. “We wanted to do what we could to keep a good restaurant alive."

On social media, North Sider Craig Melichar has voiced his support for Istanbul Corner and called the restaurant a “neighborhood asset.”

“This is a great hard working guy, tried to do everything right but needs a little help right now,” wrote Melichar in reference to Elkardoudi. “Excellent healthy food always served with a smile and a thank you!”

But that support can’t stop all the hurdles of running a restaurant during the pandemic.

U.S. Bureau of Labor Statistics reported in 2020 that meat prices increased 16% in May 2020, the most significant jump since the index was first published monthly in December 1993, and the cost of vegetables increased over 2% between March and June of 2020.

Supply chain issues were not the only thing affecting his profits. Due to the restaurant initially requiring repairs and the opening being constantly delayed due to COVID-19, Elkardoudi says it cost over $175,000 for Istanbul Corner to finally open.

On top of those costs, Elkardoudi says his bills started to pile on top of one another. Not being able to pay his landlord over the last three months, he received a court-ordered notice to recover the property.

“This could not have come at a worse time,” Elkardoudi says, adding that he is also the father of a new “beautiful baby girl.”

Elkardoudi is not the only restaurant owner affected by the pandemic. According to the U.S. Bureau of Labor Statistics, 4.3 million Americans, or 2.9% of the entire workforce, quit their jobs in August. Labor Department data shows that about 892,000 workers in restaurants, bars, and hotels quit in August. 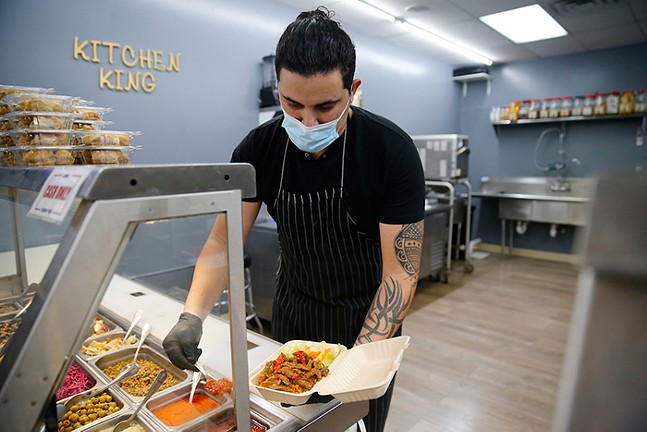 CP Photo: Jared Wickerham
Owner Marwan Elkardoudi prepares an order inside Istanbul Corner.
While some businesses were given federal grants and funds, such as the Paycheck Protection Program and Small Business Administration loans, Elkardoudi could not receive any financial assistance due to opening just last year. Small businesses that opened before Feb. 15, 2020 were eligible for PPP loans, but Elkardoudi opened Istanbul Corner in December of that year, thus making him ineligible to apply.

“Being a small, new business owner definitely depresses you trying to keep your doors open while trying to meet your needed budget,” says Elkardoudi. “Since we do not meet the requirements with previous sales tax, you are faced with the reality that we are on our own.”

Since Elkardoudi launched the GoFundMe page asking for donations, the business has obtained nearly $1,700 of its $10,000 goal.

“My wife and I have poured our life savings, blood, sweat, and tears into this business. We have maxed credit cards and used all resources to stay afloat to date,” Elkardoudi wrote on his GoFundMe page. “I’m humbly asking and hoping to get help to keep my business doors open so that I can provide for my family and continue to serve this up-and-coming community with delicious and unique food."Istanbul Corner. 541 E. Ohio St., North Side. istanbulcornerpa.com
Istanbul Corner’s GoFundMe tinyurl.com/GoFundMeIstanbulCorner