Developer says deal on community investment has already been reached 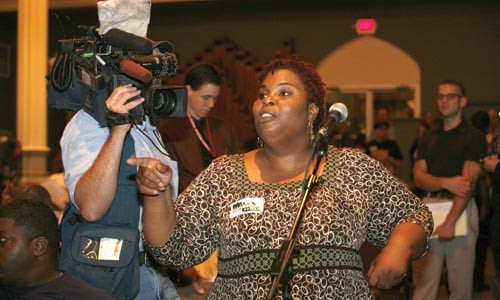 Photo by Heather Mull
North Side activist Ronell Guy speaks about the need for a new community-benefits agreement between various North Side groups and PITG Gaming.
When a band of North Siders rebelled against the scripted agenda of a Sept. 25 public forum on the proposed North Shore casino, once again nearly all of the city's media outlets were on hand to broadcast their demands.

But despite the crush of public attention, the attempt to get the casino's owner to pony up more dough for North Side community groups hasn't met with much success.

In front of a phalanx of TV cameras and flashbulbs, Ronell Guy, who has a lot of experience organizing local residents to demand affordable housing, fired a barrage of questions about the project:

"Will there be family-sustaining jobs? Will there be living-wage jobs?" Guy asked during the forum, held at the North Side's Pittsburgh Project facilities. "Is Mr. Barden willing to support some of our local schools?"

Then a dozen residents, among a crowd of 200 who attended the forum to learn more about the casino's design, began chanting "Where is the mayor?"

Don Barden, the Detroit businessman whose company, PITG Gaming, won the city's lone slot license, plans on building a casino on the North Shore. The band of North Siders organized under the umbrella of Pittsburgh UNITED wants Barden to sit down with them to negotiate a community-benefits agreement. [See "Casinos: The Battle for a Community Benefits Agreement Moves to the North Side," City Paper, Sept. 20.]

However, even though their fight for an agreement is in just its second week, they haven't made much headway, thanks to a casino operator who says he's already penned an agreement and to their alleged best bargaining chip, Mayor Luke Ravenstahl, apparently staying out of the fight.

The forum was the first in a series called by Ravensthal to solicit public input on the casino development. While the administration sent a notice, ostensibly written by Ravenstahl and asking residents to "join me" at the gathering, "it was never originally intended for the mayor to attend these forums," says mayoral spokeswoman Alecia Sirk. The mayor went to Boston on business instead.

But in the fight with the casinos, members of the group were hopeful that the mayor would stand with them, adding pressure for an agreement.

Meanwhile, there already is a standing agreement between PITG and the North Side Leadership Conference, an umbrella group representing many neighborhoods there. In an April 2006 agreement, PITG promised to invest in job training, and business- and housing development programs that would benefit the neighborhoods surrounding the casino.

"The time has long since passed to be asking for a public input process. We had that process and it concluded a year ago," says PITG spokesman Bob Oltmanns.

That didn't stop Pittsburgh UNITED from marching on with its campaign. Three days after the forum, on Sept. 28, the group called another press conference to reiterate its demand for PITG to address community concerns about local hiring for casino jobs, escalating neighborhood violence and other negative impacts that come with gambling.

"Our feeling on this is that the gaming license is a huge public benefit given to Mr. Barden," says Pittsburgh UNITED executive director Tom Hoffman. "There are a lot of pressing concerns that are not addressed in the agreement" with the conference.

Organizers have said the main problems with the existing agreement include the fact that the agreement covers only the first three years of the casino's existence. Pittsburgh UNITED wants an agreement in perpetuity.

Additionally, group members have said the agreement doesn't guarantee union jobs or jobs with benefits for North Siders. Besides, the total of $3 million promised by the agreement in community investments are "pennies" compared to what the casino would make (an estimated $350 to $400 million annually).

That's why the mayor's absence from the Sept. 25 meeting drew so much anger.

Group members have said that the mayor's political leverage is their most important bargaining chip in forcing the casino to the negotiating table. Those hopes, however, may not get them very far.

"This is an issue that needs to be worked out on the North Side, between the North Siders. If the community wants to be heard, they need to speak with one voice," says mayoral spokeswoman Sirk

But while the mayor -- the city's most important North Sider -- may not throw his weight around on the neighborhood's behalf, Pittsburgh UNITED isn't taking "no" for an answer.

"The mayor is a North Sider," says Hoffman. Pittsburgh UNITED is slated to attend an Oct. 2 community forum sponsored by the North Side Leadership Conference. "We're hopeful that the mayor will be on board with that."