North Side residents concerned a train derailment could ruin their neighborhood 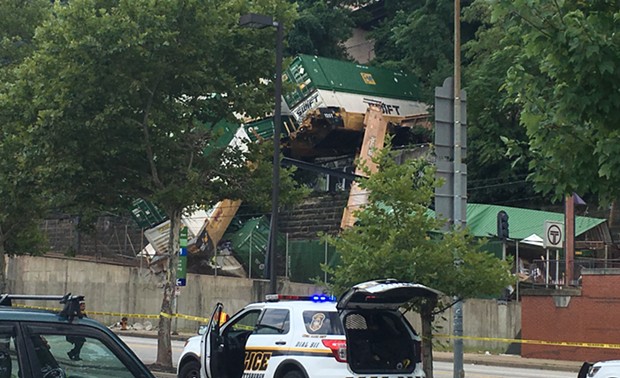 CP photo by Alex Gordon
The derailed double-stack freight train in Station Square
On Aug. 5, a Norfolk Southern double-stacked freight train derailed and crashed into the Station Square T station. Had a light-rail car been present at the station, dozens of people could have been killed or injured. Instead, no injuries were reported. The train was filled with boxes of Listerine mouthwash.

“We dodged a bullet on this one,” said Pittsburgh Mayor Bill Peduto to the Pittsburgh Post-Gazette. “This could’ve been a catastrophe.”

Neighbors in North Side feel the same way. They know the derailment could have gone much worse, and they are raising the alarm again on a proposal by Norfolk Southern to bring double-stacked trains through the North Side.

Shannon Pultz lives on Galveston Avenue, fewer than 100 yards from the train tracks. “We hear the trains rumble by everyday,” says Pultz.

“It only takes one disaster,” said Holly. “This a grave concern. It is a highly populated area, it would be devastating to our neighborhood.”

Gary Wolf, a train-derailment expert, said in an interview with Trains Magazine that double-stacked trains did go through a derailment crisis in the late 1980s.

But, Wolf noted that many of the problems with double-stack train derailments have mostly been fixed since then.

And while no data appears to exists linking double-stacked trains with increased derailments, Shannon is worried about the worst-case scenario in the North Side, given it's dense urban environment.

“It’s going through a park, it’s ridiculous,” said Shannon. “There are so many kids that play there, and the [National] Aviary is right there.”

Shannon is worried about any derailment, especially if the cars are carrying toxic materials or crude oil.

The website stand.earth created an Oil Train Blast Zone map to show what areas could be in danger of oil fires in a train derailment. Almost all of North Side and Downtown are within the half-mile U.S. Department of Transportation evacuation zone for oil train derailments.

Glenn Olcerst is part of group of concerned citizens wary of Norfolk Southern’s plans to bring double decker trains through the North Side. He is worried the freight line through the North Side is even more susceptible to a derailment. “The proposed modified Pittsburgh Line through the densely populated city contains 14 almost 90 degree turns,” said Olcerst. “Three of those turns are within 1.5 miles of each other.”