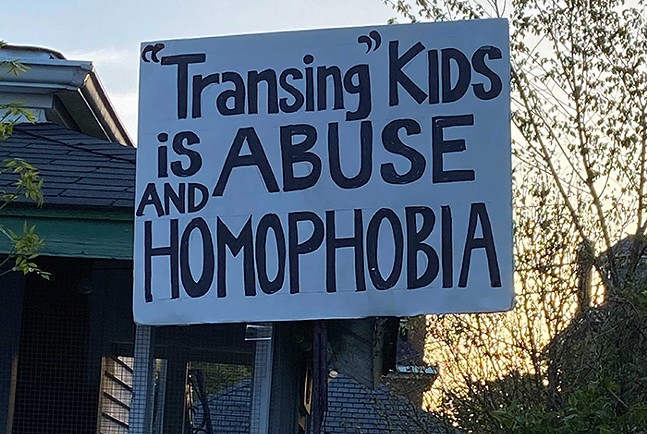 Photo: Courtesy of Sean O'Donnell
"We feel strongly that the sign, in all its ignorance, needs to be seen. People need to be disgusted and offended and moved to action so that this sort of thing doesn’t happen again." — Sean O'Donnell on the sign that appeared next door to his family's home in Observatory Hill
On May 8, 2022, Sean O’Donnell and his husband Todd Collar returned home from an outing with their four kids to find a large sign in their neighbor’s backyard.

“It was about nine feet tall,” O’Donnell tells Pittsburgh City Paper. “It was angled into our backyard. So, not the alleyway where whoever walks their dog can see it, but into our yard.”

The sign read “‘Transing’ kids is abuse and homophobia,” and it was right beneath the bedroom window of O’Donnell and Collar’s 15-year-old trans daughter.

“The sign has made my daughter feel unsafe. It is detrimental to her mental health. It puts my daughter and our entire family at risk from small-minded bigots like our neighbor,” O’Donnell wrote in a Facebook post the next morning.

“It’s another person telling her, ‘You’re not right,’ and that’s outrageous,” O’Donnell tells City Paper. “She’s a kid. She deserves to feel safe. And she deserves to feel that she can go into her backyard and not be attacked. … She's a Black trans girl,” O’Donnell says, “The statistics show that that's not an easy thing to be in this country.”

This was not the first time O’Donnell alleges that his neighbor harassed their family.

Photo: Courtesy of Sean O'Donnell
Sean O'Donnell and Todd Collar with their family
In Summer 2020, around the time that George Floyd was murdered by police in Minneapolis, O’Donnell says the neighbor threatened to call the police on their teenage son, who is Black, because he was “recycling incorrectly.”

Later that day, O’Donnell says, “She told us that people like us shouldn’t have children. She pointed to our neighbors who are African American and said ‘Those people, they just have too many kids.’”

There were other incidences, O’Donnell says, involving the neighbor allegedly following his kids around and yelling at them and telling them not to listen to their parents. The neighbor also accused the O'Donnell family of stealing her cat and posted their address in a neighborhood Facebook group, encouraging others to confront them.

O’Donnell says that after a court date in October 2020, the neighbor was issued a no-contact order. Things were calm for a while, he remembers.

“She moved to another one of her properties during the no-contact order,” he tells CP. “So when that came up for review, it seemed like everything was fine because she was gone. A month after the no-contact order had run out, she moved back to this property.”

On May 7, 2022, the day before Mother’s Day, he says the neighbor went out of her way to display a homophobic, transphobic, and sexist message.

As Collar returned home with their children, O’Donnell says the neighbor “came down to her car, which was parked about 15 feet up the street, and she drove her car all the way back to our bumper, like almost parking up against it, and she had a big sign in the window of her car that said, ‘Only women can be mothers.’”

“Obviously she wanted us to see it because she intentionally pulled her car all the way back. And kids can see it,” he says.

The next day, the large transphobic sign went up in her backyard. O’Donnell filed a police report on May 9.

The sign was removed on May 10, but “taking the sign down hasn’t negated the harassment or the impact that it’s had on our kids,” O’Donnell says.

“Our kids are adopted. They've been through some stuff before they came to us. It's our job is to provide a safe place for them, and to make sure that they're protected, and that can be difficult to do when you're living next to a bigot and a racist,” he says. “It makes it very hard.”

Collar and O’Donnell have lived on the North Side in Observatory Hill for almost 14 years. They have four children, ages 18, 16, 15, and 12.

O’Donnell says the rest of their Observatory Hill neighbors have been very supportive of the family and speculates that the sign may have come down so quickly due to pressure from others who live on the street. “We live in a neighborhood of supportive people. They're neighborly. And it's a diverse neighborhood, which was an important thing,” he says. “We are a diverse family, we want the neighborhood to reflect the diversity of our family.”

Aside from O’Donnell potentially pressing harassment charges, it’s not clear if there is a legal remedy to ensure that the sign doesn’t return.

District 1 City Councilor Bobby Wilson, who called the sign “disgusting” and “abhorrent,” tells City Paper he spoke with the city solicitor and determined there isn’t much the city can do, as the sign is protected from government interference by the First Amendment.

Wilson says he has also consulted with the Commission on Human Relations, other city counselors, and the Department of Permits, Licenses, and Inspections. He says he’ll continue to determine what is within his power to help trans people in Pittsburgh “feel safe, heard, and seen.”

Sue Kerr and Sarah Rosse, co-chairs of the City of Pittsburgh Commission on LGBTQIA+ Affairs, say in a statement to CP that the commission “has been aware of this situation for a few weeks, and has been working with the family and City officials to identify potential supports. The safety and welfare of all LGBTQIA+ children, families, and individuals must be a priority for the City of Pittsburgh. That is our commitment to this family and all families in the community. We are grateful to members of the community who connected us with the family.”

In the meantime, O’Donnell, Collar, and the kids plan to stand strong.

“The point of that sign was to intimidate us, it was to shame us. It was to keep us quiet, and make us know our place,” O’Donnell says, “and we're not doing that. Because we're not the ones who should be ashamed.”